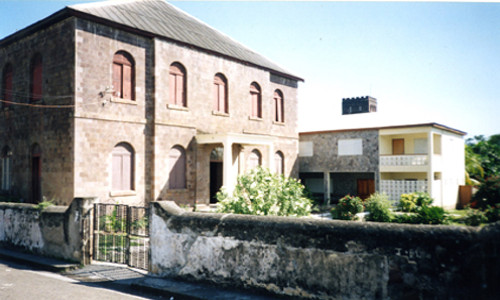 The Westley Chapel, also referred to as the Methodist church, is a solid square stone building located on Seaton Street just off of Victoria Road. It is slightly to the north of St. George’s Anglican Church.

Methodism arrived in St. Kitts late in the 18th century. On the 18th January 1787, Thomas Coke and three Methodist missionaries, Messrs Baxter, Hammet and Clarke arrived in St. Kitts from Dominica. News of their intended visit had preceded them and they were provided with accommodation by Lydia Seaton and Richard Cable a printer and William Bertie, a jeweler. Both Seaton and Cable were Antiguans of mixed race who adopted the Methodist philosophy and later had moved to Basseterre, St. Kitts. The visitors were all invited to address an audience at the Court House, then still on Church Street. Attendance was encouraging and later a number of prominent gentlemen, including the Anglican cleric in charge of St. George’s welcomed them to their homes.

Preparations were then made for William Hammet to remain as missionary on the island. Before the year was over, he had purchased the land now occupied by the Wesley Chapel from its owner, Elinore Doyle. The following year he conveyed the land to a Board of Trustees which included Richard Cable, William Brazier, Stephen Lynn, George Skerritt and John Percival. A wooden chapel was erected and it was enlarged in 1803, a project that cost £600. The membership of the new denomination grew rapidly from 700 in 1789, to 1554 in 1793, to 2587 in 1807 with the majority being persons of African descent and of mixed race. In 1822, a building of dark stone measuring 75 feet by 55 feet that could seat a congregation of 1500 replaced the wooden structure. The Chapel survived the numerous disasters that caused so much damage in Basseterre over the years that followed its construction and is now the oldest public building in the town.

In 1831, a manse was built to the south-west of the chapel but its proximity to College Street proved its undoing during the flood of 1880. In 1883, the Reverend T. Meade Chambers laid the corner stone of the present manse at a much safer distance from the ghaut but on land that the Anglicans claimed was part of their cemetery. The dispute was eventually settled amicably.

During the centenary celebrations of 1925, the Minister in charge drew the congregation's attention to the fact that the chapel’s roof needed replacing and announced that the funds raised during the celebration would be devoted to that project. The hurricane of the 12th September 1928 caused extensive damage. Renovations followed. A new steel roof was made to order in Liverpool, England, the galleries and rostrum were replaced and a vestry and two porticos were constructed. Electricity was also installed. Much of the work was undertaken by Charles Mills of Sandy Point.

In 1984, the Reverend John Gumbs undertook the construction of the annex. It provides office space, meeting rooms, a robing room and until recently a kitchen for the Meals-on-Wheels programme.

Then in 1998, Hurricane Georges once again caused serious damage to the roof and the interior. Renovations and repairs were estimated in the region of one million dollars. Work started in September 1999. The refurbishment project was managed by civil engineer Arthurlyn Belle who was assisted by Lawrence Elmes and Eustace "Stacey" Hobson, all members of the church. the renovations included the installation of a Junior Choir loft and four stained glass windows. The Chapel was rededicated on the 18th August 2002. While the work was going on, services were held in the Church Hall which, up to 1991, had housed the Boys' School.

Thomas Coke A history of the West Indies ... with an account of the missions institututed in those islands (Liverpool, 1808)