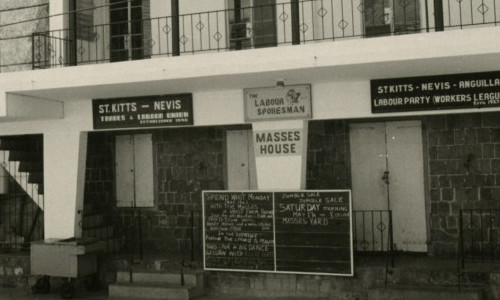 The Workers League was formed in 1932 and in 1940 its members also formed the St. Kitts-Nevis Trades and Labour Union. Meetings often took place at the building of the Mutual Improvement Society. All three organisations had members in common. Less formal meetings often took place in private residences or at business belonging to the membership.  However the activities of the Union worried some of the members of the MIS and both the League and the Union were told to find other accommodation.  Charles Halbert came to their rescue and offered them a space in his book shop which was then located on Church Street.  However when that building was turned into the Blakeney Hotel, the two organisation were once again without a meeting place.

In 1947, a property on the western side of Church Street belonging to a Mrs. H Archibald came on the market. The Executive of the St. Kitts-Nevis Trades and Labour Union, long accustomed to meeting in the area, decide to attempt to purchase it. Barclays Bank was approached for a loan. Initially the manager seemed inclined to make the funds available to the organisation but there was soon a change of heart. The Union was able to enlist the assistance of Mr. Elliott of the Royal Bank of Canada. The account in Barclays was closed and with a loan from RBC, the purchase went ahead. The official opening took place on the first Sunday in October 1947 and the first executive meeting of the Union in its new home took place there on the 22 October.

An Adjoining property was purchased in 1972 and Masses House was extended and renovated with the assistance of enthusiastic volunteers. That same year the Union bought new printing equipment.

In 1979, the property to the back of Masses House was acquired from Mrs Rhyllis Longford. Building contractors Leroy Byron and Sons designed and built the extension as a spacious area that could accommodate a large number of persons. It was formally opened on the 14th December 1980.

However in April of 1980, the PAM-NRP administration amended the Protection of Wages Ordinance of 1967 and it was no longer legal for employers to deduct union dues and the Union’s reserves quickly dwindled. Two years later, National Bank demanded payment of the outstanding loans that the Union had for the building and for a few days it looked like its presence on Church Street was about to come to an end. However the necessary funds were raised and the Union continued to enjoy the property. During this time the blackboard that rests on the rails on the buildings front became a political tool proclaiming stands taken by the Party and the Union and criticizing actions of the government or businesses that infringed workers rights or that were deemed to be not in the interest of the nation.

Masses House became the site of all the Union and Labour Party meetings including their annual general conferences in May and October. The Yard was used for Labour Queens shows and dances throughout the 1980s and early 1990s.

From 1996, the Labour Queen show started being held at Warner Park. The venue became less popular for dances and other social events as the number of night clubs increased especially as it did not afford cover from rain. In 2006 it also became uneconomical to continue the printing of the newspaper at Masses House although the layout is still done there.