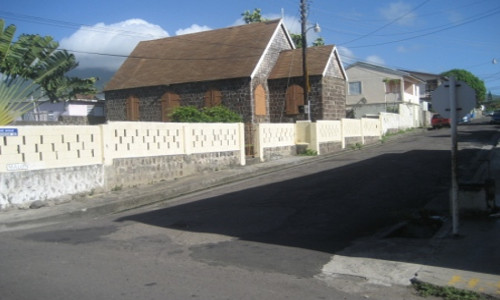 ST. BARNABAS ANGLICAN CHAPEL is a small place of worship on Malone Avenue.

Shortly after Governor Philippe Lonvillier De Poincy arrived in St. Kitts in 1639, he donated the service of fifty enslaved workers for the construction of a very fair Hospital, in a very healthy place, where such sick persons as are unable to effect their recovery at their own houses, are attended, and maintained, and visited by Physitians and Surgeons, till they are restored to their former health. Strangers also who fall sick in the Island are receiv'd in there.

De Poincy was a Knight Hospitaller of the Order of St. John of Jerusalem, Rhodes and Malta. The Order had been engaged in the care and physical well being of pilgrims to the Holy Land from the 11th century. The limited medical knowledge of the time meant that what they offered was mostly a safe haven rather then actual medicine. Although this remained their main objective, they responded to the volatile situation in the Middle East they became a military organisation and along with the Templars, they were the most powerful Christian groups in the region at the time. The early traditions were never abandoned and the Order continued to run hospitals in the places where it was resident. It was this tradition that De Poincy was observing when he built his hospital on land west of College Street. At that time there would not have been any other buildings to obstruct the flow of breezes from the sea, and it was still close to the town.

In 1697 when the Treaty of Ryswick was being negotiated the greatest concern for the English in the Caribbean was the fate of the French parts of St. Kitts which they had occupies since 1690. It was evident that the only hope for peace on the island was to end its division and place it in the hands of one imperial power. However the French were unwilling to give it up and in 1698, Governor Codrington was ordered to restore it to them. The English inhabitants were not happy with this decision and vented their feelings with a wholesale destruction. Codrington pointed out that this had been the French had behaved in a similar manner earlier when they had gained control of the whole island.

It was probably during one of these damaging transitions that the Hospital was destroyed. Eventually the French Huguenots who lived in Basseterre were allowed to build a church on the land it once occupied. Having endured many years of persecution in Catholic France, some had migrated to the Americas, including St. Kitts. De Poincy who had recognised their value as responsible and industrious citizens, had not barred them from settling on the island. Before long there was a small community in St. Kitts. At some point, between 1690 and 1698 when the French part of the island was occupied by the British, the land once occupied by the Hospital was given to the Huguenots who built a small chapel on it. Once again the new structure suffered damage during the French invasion of 1705. In 1713, the Treaty of Utrecht ended the French presence on St. Kitts and in 1726, when the French lands were being sold, the Huguenots petitioned the Committee to be allowed to keep the land and their church. This request was granted.

Over the years the Huguenot community on the island diminished in numbers and was eventually absorbed into the Anglican Church. It is not clear at this point when this change was reflected in the denomination of St Barnabas. Located on the north west corner of Malone Avenue and Fort Thomas Road, the little chapel has a very loyal congregation that prefers the early service there to the more elaborate ones at St. George’s.