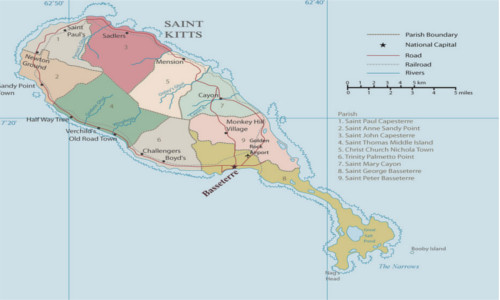 Douglas estate lies north of Basseterre. It was once called Pensez-y-bien.

The estate was part of the French Basseterre Quarter but at this point nothing is known about its French owners.  By 1714 it was in possession of Colonel Walter Douglas.  He was one of seven sons of William Douglas of Baads and his wife Joan.  Three of his brothers practiced  medicine, with James in particular becoming famous as an obstetrician whose research on female anatomy resulted in several parts of the female pelvis being named after him.

Either an adventurous spirit or the uncertainty of an inheritance led young Walter into the military.  He joined William of Orange when he invaded England in 1688 and from then enjoyed the royal favour of the king and his successor.

In 1711 following the murder of Governor Parke in Antigua, Colonel Walter Douglas was appointed Governor of the Leeward Islands. In 1714, when Queen Ann was considering the restoration of the French lands in St. Kitts to the French Crown, Douglas and others sent her a petition asking that if the properties were to be restored that the French compensate them for the improvements they had made to the estates or that they be allowed time to make good their investments.

Two years later Douglas was tried for bribery.  He had exacted £10,000 from Antiguans involved in the killing of Parke before publishing the Queens pardon to them.  He was sentenced to five years imprisonment, a fine of £500 and removed from the post of Governor.

In 1714 Douglas mortgaged his Pensez-y-bien plantation to Alexander Baxter who, in turn, was indebted to John Ward, an unscrupulous merchant whose conduct earned him a place in the writings of Alexander Pope.  There was still a mortgage on the place in 1723. Although Douglas was still alive, he seems to have given up his interest in the property and it was his son John who negotiated with the Commission for the Sale of the French Lands.  With the help of Governor Hart who let him £1000 so that he could regain ownership of part of it.  In 1726,  front of the Commission, John Douglas after describing the boundaries of the estate stated that he

of the said plantation there are about one hundred & thirty acres of plant-canes & about forty of Rattoons a peece of potatos & about eight acres of Negro provisions, & about fifty acres to be planted; that there are settl’d likewise by his leave on between Twenty & thirty acres thereof John England, John Somerfield, James Mitchell, John Waters & Peter Mitchell, being all poor men.  The Buildings on the said plantation are a lofted stone Dwelling house in length about thirty nine feet & twenty four & a half in breadth, with a porch fourteen feet in length & twelve in breadth & a shed twenty four feet & an half long & ten broad a stable in length twenty six feet & in breadth fourteen feet, a Coach house of the same length & twelve foot wide, a Kitchin & other offices forty four feet in length & eighteen & a half in breadth, & another outhouse forty four foot long & sixteen broad.  All which are boarded & shingl’d.  Allso two Boiling houses, one of seven Coppers, in length fifty three feet & in breadth twenty five, the roof whereof is one half tyl’d & the other half thatcht with two Mills & one Still, the other Boiling house of four Coppers, which with a shed joining to it is twenty four foot long & thirty six broad, boarded & shingl’d with one Mill & a Still.  For the purchase of which said Two hundred acres the proposer offers to give Ten pounds Sterling per acre, to pay one third down of the purchase money, & to give security for the rest payable at such time as requir’d.”

Another two hundred acres were surrendered to General John Hart.

John Douglas married Susannah Lambert, daughter and one of the heiresses of Michael Lambert and through this marriage and other family dealings Douglas acquired part of the property in the Parish of St Thomas that had belonged to her father.    They had a son, who was born about 1732.  The great house at Pensez-y-Bien, better known as the White House was built in 1738.

John St Leger Douglas was a member of the Parliament from 1769 to 1783.  In 1775 he made what seems to have been his only speech in the House of Commons.  At a time when most West Indian planters were concerned about the future of the West Indian plantations given their dependence on North America, Douglas supported  sanctions against the American colonies  because “it was better to suffer temporary inconveniences than sacrifice the British empire in America to the local interests of any of its constituent parts.” Outside of politics, Douglas bred the undefeated thoroughbred racehorse Goldfinder.  He was an absentee owner and his estates in St. Kitts were managed by others.  He died in 1783 leaving considerable debts.

His son William enjoyed the estates in St. Kitts as tenant for life but they were actually mortgaged to Sir Thomas Neave, Sir Matthew Tierney, his wife Dame Harriet Mary nee Jones, and Edward Tierney and his wife Anna Maria Jones.  The White House as the plantation house was called, was already in existence in 1828 and known by that name.  207 enslaved workers worked on the estate in 1834.  Following Emancipation, the compensation for the enslaved at Douglas amounted to £3259. 0s 7d.

The property was acquired by Solomon Wade in 1859 and renamed Douglas Estate. Solomon Wade took his family to England three years later but continued to take an interest in the properties he owned in St. Kitts.  He visited often and hired capable managers and attorneys to run them.   In his will, Solomon left Douglas plantation to his youngest son Edwin.  Edwin worked as a legal clerk for two years and then returned to St. Kitts.  Solomon had hopes that he would eventually learn to manage at least one of his estates.  Edwin made the White House his home while he lived on St. Kitts.

The estate became Wade family property in 1909 on Edwin’s passing.  Paget Wade and his wife Amy who managed the family concern had great hopes that their son, Charles would eventually do the same.  He was artistically inclined and tended not to pay much attention to it until he was forced to do so when his mother died in 1943. In the post war year he was practically resident here.  The White House became his home and that of his wife, Mary Gore-Graham who he married in 1946.  Charles died in 1958 and his wife continued to live in the house.  When government took over the sugar lands in 1975, Douglas estate was among the lands in the acquisition but special arrangements were made for the great house to remain in the family.