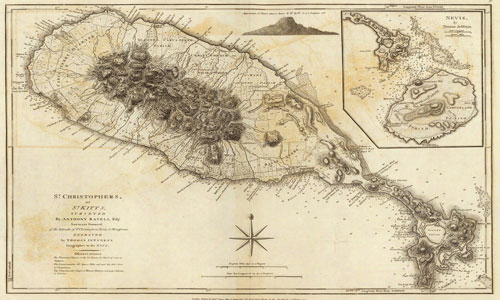 Caines estate is located near the village of Dieppe Bay. It was part of the French Quarter called Capisterre. It is not clear when members of the Caines family arrived in St. Kitts.

CAINES
On the 15th August 1726 Charles Caines offered to buy a plantation in Capeseterre Quarter above Deep Bay from the Commissioners for the sale of the French Lands. It contained 152 acres 3 roods and 7 perches. At the time, thirty acres were in planted canes, twelve acres were in ratoons, one acre in provisions. Caines had a house on it measuring 36 ft in length with two rooms, a kitchen and a steward room with an adjoining chamber. There was also a boiling house of hard timber containing 4 coppers and 2 other houses below the path of 32 feet each with out-house. These were made of hard timber and shingled. He offered £5 sterling per acre. The Commissioners agreed to the sale of 164 acres 2 roods 33 perches of varying quality (none of the land was considered top quality) for £8 sterling per acre but Caines asked for time to consider their price. He was later listed as a puchaser.
The next day Thomas Caines proposed to buy a 29 acre plantation bounded to the north with the sea, to the east with the plantation late of Col. John Hamilton of Antigua, to West with the land of Mary Hutchenson, widow. He offered £10 per acre.
By mid-century Charles Caines Jr had with dwelling house, two store rooms, kitchen, chaise house, poultry house, hog and sheep pen and shed stable adjoining kitchen on his plantation. He also leased neiboring Gibbons the estate of Captain Richard Ambrose Stevenson. In 1772 a hurricane hit the island and the damage caused at Caines estate was described as follows
almost every building on the gentleman's estate was destroyed; a very elegant dwelling house with its furniture, perhaps the most valuable in the island, torn to atoms; all the family wearing apparel lost and the family reduced to great distress for some time. I have been told and I believe truely that two of Mrs Caines' silk gowns were found wrapped around the weather-cock of St. John's church. The crop has suffered greatly. (An Account of the late Dreadful Hurricane which happened on the 31st August 1772… by the editor ([Thomas Howe] Basseterre, 1772) p. 31)

The most notable member of the Caines family was perhaps Clement Caines son of Charles and Judith Crooke, (both died in 1793) who. through her mother was heiress to the Cunnyngham legacies. Clement Caines resided on St. Kitts and was very much involved in the management of his properties, In the General Assembly of the Leeward Islands in 1798, debated a resolution stating that the abolition of slave trade ‘would be oppressive to the British planter, destructive to the sugar colonies and consequently to the British Revenue and of no benefit to the African themselves” Caines who was a member, declared before the House,

The slave trade ought to be abolished. It ought to be abolished immediately. It ought to be abolished for the sake and benefit of the planter. ….
To the African trade may be imputed the unnatural sterility of our female slaves – death without number among our infants – the premature decay, and loss of our ablest people, together with a waste and misapplications of human labour, that renders sugar estates, the most costly, the most miserable, and it is now feared, the most ruinous tenures upon earth…… While advocating for the better treatment of enslaved workers and the end of the slave trade he did not suggest that the enslaved should be emancipated. He published his speech in a book about managing a sugar estate that was very much based on his own experiences. Caines also took an interest in the school for destitute children which housed orphaned white children.
The McMahon map of 1828 names him as the owner of the Caines estate. He became the largest slave owner on the island. In 1817 he registered 565 slaves scattered on various estates owned or leased by him. Unfortunately we do not know at this time, which plantations these were. Some of the transactions that bare his name are very complicated and need knowledge of the 19th century property law to unravel them.

EWING
Before 1853 Caines estate became the property of James Ewing and Co of Glasgow, Scotland. It was still in the hands of his heirs in 1880. Ewing had extensive holdings in Jamaica. In 1834 he made claims for slave on 5 estates in Jamaica but no such claims are recorded for St. Kitts . This could mean that Caines was acquired after 1834. He was not a resident estate owner but the wealth generated by his holdings gave him status and enabled him to achieve a great deal in Glasgow. He was an agent in Glasgow for the imports from the sugar plantations. He was involved I the founding of Glasgow Bank in 1809 and the Savings Bank of Glasgow in 1815. He also invested a great deal of effort into education, hospital management and prison reform.

BLAKE
By the end of the 19th century Caines estate became the property of Daniel Sharry Blake. He was probably born in Nevis but at the turn of the 20th century he was one of the largest land owners on St. Kitts. He was a member of the St. Kitts-Nevis Executive Council and was active in the St. Kitts-Nevis Constitutional Reform Association formed in Oct 1886. The two islands had been united under one presidency in 1881. This organization was probably working towards ending the union. No manifesto of its ideology has been found to date. He died in London in 1910 and in his will he left Caines and Willetts estates to his daughter Lilian Agatha.
In 1916 Lilian married the Barrister, Cyril Malone the son of Solomon Malone of Antigua. He became involved in the St. Kitts Representative Government Association which was attempting to achieve representation in government through elections (with limited franchise). The moving force behind it, was Clement Malone, his cousin. Cyril and Lilian travelled frequently and she was a lavish spender both on herself and in her gifts to others. In St. Kitts they spent their time between Fairview, their favourite house, and Dieppe Bay (later the Golden Lemon). Cyril died of Parkinsons in 1948, Lilian eventually remarried and sold off her property in St. Kitts. Caines estate was among the estates acquired by government in 1975.