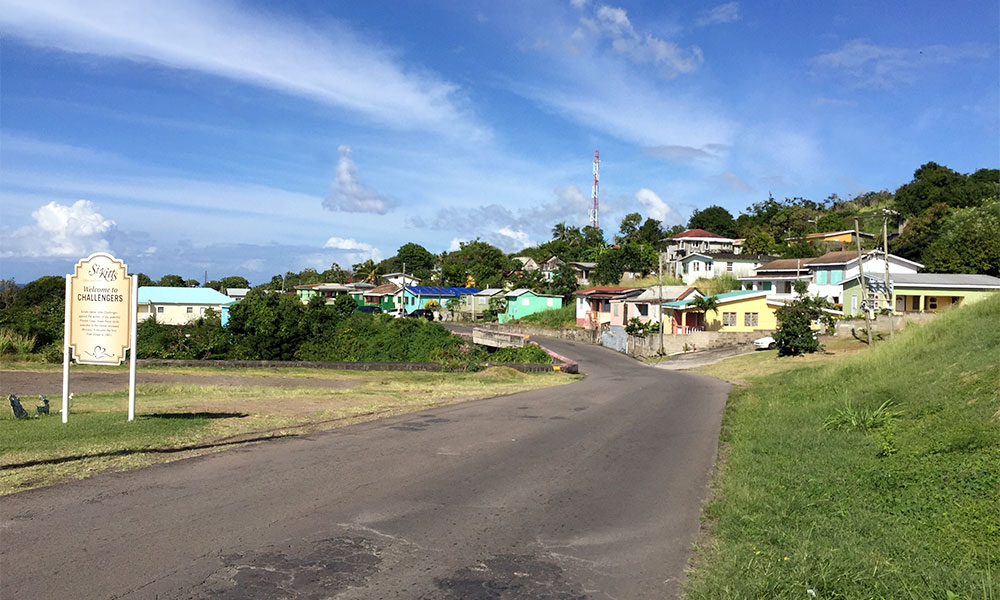 Challengers Is a village in the Parish of Trinity. It was a rather small estates on sloping ground that once belonged to John Challenger. Challenger also owned a plantation in the Parish of St. Thomas, called New Invention. In his will he divided his property between his four sons and one daughter. To his son Clement, he left the small property he had in Trinity as well as one thousand pounds and 5 slaves.

Clement Challenger did not marry but had children with Hester Osborn his house keeper. These were John, Richard and Clementina. In his will, written in 1832, he left this land to his son John. Right away, his heirs had to use a property in Basseterre to deal with the debt that Clement had at the time of his death. John went on to borrow £200 from James Ewing and William Mathieson, merchants of Glasgow.

Visitors who came to St. Kitts in 1840 were told by John that he was selling or renting small lots to individuals who wanted to live there.

“Forming what they call an independent village; that is a settlement not under the control of planters, as the little villages in which the laboring classes reside, generally are. He remarked that he had been censured by the proprietors of estates in his neighbourhood. The fear of drawing from under their control the labourers who locate in them, appears to be the ground of their opposition.” (Narrative of a Visit to the West Indies: In 1840 and 1841 By George Truman, John Jackson, Thomas Bedford Longstreth (Philadelphia, 1844) )

The authors of this publication were Quakers and although they deny wanting to investigate the effects of Emancipation in the islands, their writing alludes to it constantly. It is not clear if John Challenger was feeding this need or whether he really intended to sell and rent in small lots to labourers. Financial problems continued to plague John and his wife Sarah Maria. A piece of land of four acres could not be cultivated as cane land unless it was being worked with another estate or simply produced cane for processing elsewhere. The land in Trinity was therefore sold off to the six persons including John’s sister Clementina. Rent is not recorded in the Christopher Register but sales of lands are and except for the earlier agreement with Cluckies, no records could be found of Challenger selling small lots.  The sales found were as follows:

· By Indenture of 18 January 1848 to Elizabeth Jackson Calfe, spinster for £25 sterling, in her actual possession, land lying in parish of Trinity bounded to the east with lands of John Hazell deceased, to the west with lands of John Challenger, to the north with the high road leading around the island and to the south with the seashore. 125 feet east to west and 300 feet north to south (Doc no. 20413 and 20414)

· By Indenture of 1 March 1848 to Thomas James, Wesleyan Missionary. For £85 11s 6d sterling or $410 75c local money - All that parcel of land situate in parish of Trinity bounded to the north with the high road, leading around the island, to the south with the seashore to the east with lands of John Challenger and to the west with the lands of stone fort estate of Daniel B Garling measuring 320 feet east to west and about 300 feet north to south a part of which said premises is now in the tenancy of John James Philips (Doc number 20363).

· Indenture of 10 June 1848 to Ann Susanna Cox Amory spinster for £20 sterling land in parish of Trinity bounded to the east with land of Elizabeth Jackson Calfe, to the west by land of John Challenger to the north by the high road leading around the island to the south by the seashore measuring 30 feet east to west and 300 feet north to south (Doc no. 20422 and 20423)

· By Indenture of 24 June to Clementina Challenger spinster for sum of £35 18s sterling land in parish of Trinity bounded to the east with lands of Ann Susanna Cox Armory to the west with lands of John Challenger to the north with the high road leading around the island to the south with the seashore measuring 75 feet east to west and 300 feet north to south (Doc no. 20417 and 20418)

· By Indenture of 7 Nov 1848 to George Liverpool planter for sum of £20 16s 8d sterling land in Trinity bounded to the east with land of Clementina Challenger to the west with lands of John challenger, to the north with the high road, and to the south with lands of John Challenger 30 feet east to west and 100 feet north to south. (Doc no 20415 and 20416).

Indenture of 27 February 1849 to William Clukies. William Clukies had agreed to advance and lend of Challenger the further sum of £83 6s 8d in addition to the sum of £275 sterling for a Lot of land in Parish of Trinity containing by estimation two acres bounded to the east in part by lands formerly of John Challenger now of George Liverpool and in part by lands of Clementina Challenger to the west by lands of John Challenger at present mortgaged to the Rev Thomas James to the north by the High road to the south by the sea

Another document drawn up on the 27 February 1849 between John Challenger, and Alexander John Cock merchant shows Challenger indebted to Cock in the sum of £42 8s 8d sterling and using his household furniture as security. (Doc no 20421)

It was through the financial distress of one family that Challengers became the first “free” village in St. Kitts.