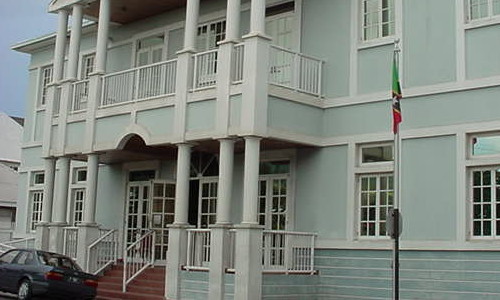 When the British took over Basseterre in 1713 they slowly moved their institutions of administrations and justice from Old Road to Basseterre and more specifically to Church Street. It was not long before these early structures were outgrown by the need for space and new locations had to be found.

Plans to erect a court house in the Square were first formalised in an Act passed in 1750. It was obvious even then that the building was to house a number of offices which included that of the Public Secretary, the Registrar, and the meeting rooms for the Council and Assembly. A jail was to be built close by. These arrangements did not materialise immediately.

In 1772 the meeting place of the Assembly in Basseterre was completely destroyed by a hurricane and the lumber and shingles were sold for fear that the might be lost to thieves. A new place had to be found for meetings making the construction of a new council hall more urgent.

The new Court House became the home of various courts. These included

*  Court of Kings Bench/Queens Bench and Common Pleas which was a senior court of common law, with civil and criminal jurisdiction

*  Court of Chancery which dealt with disputes relating to estates

There were also a number of smaller courts including Grand Sessions, Quarter Sessions, Special Sessions which dealt with criminal charges against slaves, Court of Errors, Court of Complaints, Insolvent Debtors and Debtors, Magistrates’ Court, Special Justices – these were the stipendary magistrates who were appointed to deal with matters arising during Apprenticeship. Only the magistrate who sat in Basseterre would have used the Court House.

The Courthouse was also significant from the point of view of administration of civil matters. It housed the offices of the Land Registry and from 1817 to 1834 provided facilities for the Registrar of Slaves. It also provided accommodation for the Assembly and the Council. Effectively, this meant that the centre of administration had shifted from Church Street to the Square from 1792. In 1894 the building became the home of the Public Library which was responsible for numerous archival holdings until a partial move to the new Administration Building was made in 1965. For a number of years, the Ministry of Health was also located at the Court House.

Over the years the Court house was the meeting place for the Royal Commissions that visited the island to investigate conditions here.

The building burnt to the ground on the 1st of September 1982. Ten years later, Hugh A C Martin and Associates of Puerto Rico designed a new complex and Stephen and Associates of St. Kitts undertook the construction.    The construction of the present building using mainly concrete and which mirrors the look of the facia of the old building was completed in 1998. Much of the delay in completing the building was due to its location at a point where there are continuous water table fluctuations.

Today The building houses the Registrar’s Offices, Traffic citations, and Criminal and Civil courts. A new building at the western side of town, adjacent to the Clarence Fitzroy Bryant College now houses the Charles Halbert Public Library. In 2004 the Court House building was renamed the Sir Lee L. Moore Legal and Judicial Complex.

1826 Following concerns raised by Governor Charles Maxwell, a Grand Jury was convened to hear charges of cruelty against Richard Cardin who had kept Betto Douglas, a fifty-two year old, enslaved woman in the stocks for six months after she had demanded her freedom. The case was dismissed as frivolous.

1935 Following the labour disturbances better known as the Buckley’s Riots, a number of individuals were brought to trial for rioting and other related charges. Noted barrister at law, Clement Malone (later Chief Justice) defended many of them.

1968 the trial of several persons detained following the 10th June invasion of St. Kitts by Anguillans and American mercenaries. These were dismissed on grounds that the detention order failed to state in detail why the detainees were being held, as required by the Constitution

1975 following the nationalization of the sugar lands, the owners took action against the Attorney General and the Minister of Lands. They were disputing the constitutional validity of the Sugar Estates Lands Acquisition Act of 1975. The court ruled that the act was unconstitutional as the act sought to limit compensation to ten million EC dollars.