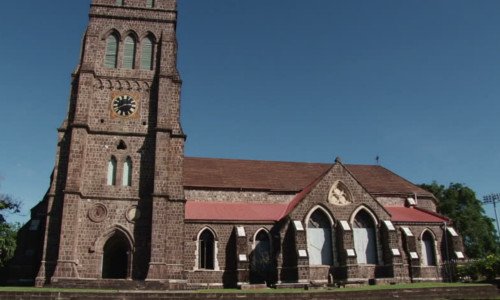 ST. GEORGE’S ANGLICAN CHURCH is the largest church in Basseterre. It stands at the head of Church Street and resembles an English parish church in style. The outer walls are of heavy andesite rock and the roof is covered in slate. Like many of the buildings in Basseterre this church has had its ups and downs, often rising from ashes like the mythical Phoenix.

In 1635, at the request of the directors of the Company of the Isles of America, the Provincial of the Capuchin Friars of Normandy assigned three men, Fathers Jerome, Marc and Pacifique de Provins to care for the spiritual needs of the French colonists on St. Kitts and to attempt the conversion of the small Kalinago population that remained on the island after the massacre of 1627. In Basseterre they erected a place of worship which Rochefort describes as a fair Church able to contain a very great Congregation: The Structure is of wood, rais'd on a foundation of Free-stone: Instead of Glass-windows there are only turned Pillars, after the fashion of a Balcony. It is cover'd with red Slate. The Friars also had churches in Cayon and Capisterre but in 1646, Governor De Poincy felt that they were taking sides against him and ordered them to leave the colony. He replaced them with the Jesuits. In 1672 they built a church which they called Notre Dame.

The wars that ravaged St. Kitts well into the 18th century caused destruction everywhere. Even the churches were not spared.

John Anderson arrived in St. Kitts in 1719 to take charge of the Parish of Trinity. He was also given responsibility for the care of Basseterre which was still not recognised as a parish. In a letter dated 15 July 1720 he wrote:

The church at Basseterre in the French times is said to have been one of the fairest and best in all the West Indies and it appears to have been so from the walls and ruin yet remaining. But upon our taking the island from them this church was burned down by some unfortunate chance or other and in all appearance will never be rebuilt without a contribution from England.

In a letter of the 22nd April 1721 he explained how he was holding services in town:

Our place of worship at Basseterre is only a common hired house and is not large enough for a third part of our people and so exceedingly hot when crowded, by reason of its ill situation and the lowness of the roof, that many persons faint away and are forced to be removed in the midst of the public worship.

St. Georges became a Parish in 1723 but Anderson was not appointed its first rector as he had quarreled with the administration after he refused to give communion to the Governor of Montserrat who was in a very open adulterous relationship. The first rector was John Beronville who took charge in 1733 and continued to care for the parish till 1765. Some time later the church was made fit for worship but in 1772 a devastating hurricane destroyed part of the roof and in 1776 St. George’s was again damaged by fire. An earthquake in 1842 and another hurricane in 1843 reduced the church to ruins. The following year the construction of a new building was started to the east of the old church. A number of internal disagreements in the Vestry and public dissatisfaction with the location of the new church brought work to a halt. Finally construction of the new place of worship was started in 1856 and on the 25th March 1858 it was consecrated by Bishop of Antigua. Designed by William Salter, the church was a massive stone building that could accommodate at least a thousand worshippers. Slater had also designed the furniture and fittings. The stained glass windows were produced by Clayton and Bell. At the time this was a new company but it went on to become one of the most prolific and proficient firms of English stained glass manufacturers. The one installed in the north-eastern extremity in 1861 was dedicated to Daniel Gateward Davis the first Bishop of Antigua, who had previously served as rector of St. George's, Basseterre.

A destructive fire took its toll on the town on the night of the 2nd July 1867, It broke oot in a bakery on the corner of Central and West Independence Square Street spreading quickly to the west as far as Salt Pond Alley. From there it turned north and made its way along Cayon Street a far as the Prison. St. George’s was completely destroyed. Immediately an appeal for contributions was circulated in Britain and the Caribbean. It was estimated that rebuilding would cost £6,000. The new furnishings were to be less elaborate than the ones destroyed in the fire. The island administration agreed to match the sums raised through voluntary contributions. The work of reconstruction started soon after.

As long as the structure could support a bell, this could have been used as a warning of imminent danger, such as fire or invasion. In the 19th century the bell became another means of repressing the life of the enslaved. The law would not allow enslaved persons without special passes to be on the streets after 10.00pm. From the 4th November 1822, the bell of St. George's was to be rung at 9.00pm every night as a warning that those enslaved persons who were still about, to return to where they lived within the hour.

In 1870 an organ was commissioned from the firm of Booth of Wakefield. Henry Booth planned and designed the instrument. In 1872 it was dismantled in preparation for shipping to St. Kitts. It was placed on the Ruckers, a cargo vessel. Booth arrived in St. Kitts on the 2nd February 1872. Following his first visit to the church he noted that it was of good size but that it had hardly any glass. The windows were shuttered to keep out the sun and let in the breeze. The place assigned for the organ was very much to his satisfaction.

The packages containing the organ arrived in St. Kitts in March 1872. Salt water had caused considerable damage and rats had eaten out much of the leather that covered some of the parts. A great deal of repair had to be done before the instrument could be installed. The organ was played for the public for the first time on the 16th May 1872. After Booth’s departure, Joseph Grimes maintained the organ for many years and he and members of his family played it for the congregation well into the 1930s. Marie Grimes was succeeded by Elaine Matheson (1937), Leighton Warner (1957), Eugene Bowrin and Velma Vivien Gumbs (1976). There is no full time organist at present.

Through the 20th century the church was lovingly looked after by the congregation it served. In 1956 a Lady Chapel was placed on the northern side of the Chancel and a Sacristy was build on to the church. On the 8th October 1974, St. George’s sustained damage from a severe earthquake that shook the Leeward Islands. The repairs were affected immediately by the English company of Higgs and Hill then engaged in the expansion of the airport.

Also involved in the work of repairing St. Georges and the other Anglican churches around the island rested in the hands of Lionel A. J. Trotman. He was again engaged to provide an estimate for the repair of the roof in 1984 but continued to be involved in the project right up to its completion and at no cost to the church.

Archdeacon Rudolph Smithen raised funds and also procured a loan from the United Society for the Propagation of the Gospel which made possible the replacement of the roof shingles, the wooden floor and the pews of the centre aisle.

In 1986, St. George’s was rededicated. The ceremony took place on the 10th November, one day after the Mount Olive Masonic Lodge had celebrated its 150th anniversary. Several members of the congregation were involved in the Lodge and its premises was for many years the venue of the church’s annual bazaar.

St. George’s has been the venue of many ceremonies that impacted the nation. In 1978 it was the venue for the requiem mass for Robert Bradshaw, first premier of St. Kitts-Nevis and Anguilla and in 1979 of the state funeral of his successor, C.A. Paul Southwell took place there.

Today St. George’s continues to stand proudly at the head of Church Street and is home to the many Anglican worshipers who live in that parish as well as the location for the annual multi-denominational Concert of Christmas Songs.