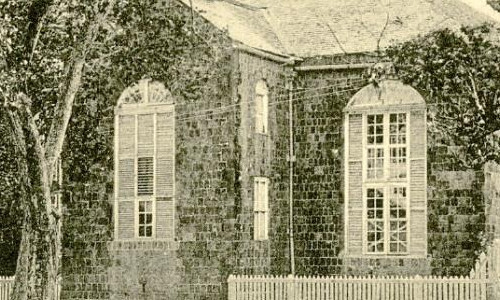 The Zion Moravian Church is a solid structure at the point where College Street and Victoria Road meet. Perhaps its most impressive feature, is its very tall windows. Its interior is modest and uncluttered.

In 1774, while on a visit to England, the American born lawyer, John Gardiner, met with Moravian representatives Benjamin La Trobe and John Wollin. Having gone through a politically strenuous time in St. Kitts, Gardiner was growing disenchanted with both the secular and ecclesiastical authorities on the island. He had already heard of the results achieved by the Moravian missionaries on Antigua and asked that they would consider a similar venture in St. Kitts. He promised access to his own plantation and any other assistance they might require. Bishop Mack of St. Croix was sent to St. Kitts to assess the situation. His report was encouraging.

In 1777 John Daniel Gottwalt of Germany and James Birkby were sent to start the mission. They arrived in Antigua in April and stayed there for six weeks to acquaint themselves with working among the enslaved. They finally arrived in St. Kitts on Sunday 14th June 1777 accompanied by Peter Browne of the Antigua mission. On arrival they were shocked to find that, in Basseterre, the Sunday was not kept as a day of rest and pray but instead all kinds of business was carried on. Gardiner took them to his estate in Trinity where Browne preached to the enslaved. Eventually Gardiner introduced them to the Commander-in-Chief of the island and secured a house for them in College Street. Meetings took place on Sundays and weekdays and alternated between Basseterre and Palmetto Point. Planter opposition was soon laid to rest when it was realised that the missionaries were not encouraging rebellion but rather insisted on obedience and duty. They even had enslaved workers serving them.

In December of that year, the missionaries offered the enslaved an alternative to the revelries that took place on the streets and the estates yards and a significant number chose to attend service on Christmas Day and Old Year’s night. During 1778, Brother Gottwalt visited a number of estates between Basseterre and Sandy Point but most services continued to be held in Basseterre. Meetings specifically for children were started and the congregation continued to grow. The first baptisms took place on the 14th November 1779.

St. Kitts was invaded and captured by the French in 1782. This meant that the island was then under Roman Catholic, French rule. There was some concern for the safety of the Moravian missionaries and plans were set in place to evacuate them to St. Croix. However, Gardiner. who was still their patron, had been appointed attorney general by the French governor and the missionaries continued to enjoy the good will of the new regime.

On the 29th March 1785, the missionaries gave up the house that had been hired for them and moved into a small building also in College Street. It had been bought for them by the Church. Two years later a large stone wall was erected to protect the house from the torrents that came down College ghaut when the rains were heavy. Later a manse was built on the site, but the exact date is not known.

In 1788 the congregation numbered 200 and a bigger place of worship was being sought. The Mission Board’s approval was obtained and the foundation stone was laid on the 21st May 1789 and the church was consecrated on the 11th October of the same year. As the congregation in Basseterre grew, plans were started for activities further afield in Cayon and Sandy Point. Lack of staff hampered the spread of the mission to the various communities but in 1825 Sunday schools were started in Basseterre and Cayon and students, including the children of the enslaved, were taught how to read.

Emancipation was declared in 1834 but the enslaved on St. Kitts met the event with hostility as they resented the four year apprenticeship period that was to follow. Among those arrested for creating a disturbance were members of the church although the missionaries did not encourage rebellion.

By welcoming the enslaved into their congregation, the Moravian Brethren offered them an opportunity to attend church as the enslavers did and to learn reading and writing. As a result by the following year it was recognised that an even bigger place of worship was required especially as the old building had also been subjected to hurricanes, flooding and earthquakes and was in desperate need of repair. A yellow fever epidemic delayed the start of work on the new structure especially after four missionaries died in quick succession. On the 4th December 1837 the foundation of a new school was laid in Basseterre and it was opened on the 16th October of the following year. Finally on the 16th June 1841, Governor Cunningham laid the foundation stone for the new church which welcomed worshipers for the first time on the 30th April 1842. Twenty years later the organ was installed. Henry Booth who came to St. Kitts to install the one at St. George's was a guest at the Moravian Mission House, next to the church. He found the setting very pleasant and described his bedroom as very large and comfortable with a bed in the middle surrounded by a mosquito curtain inside which I have not been able to find a way. Booth arrived before the new organ and had a long wait during which he kept busy by repairing other organs on the island. The one at Zion was his first job. He found that rats had wreaked havoc on it and it required a lot of time and patience to make it sound healthy again. Meanwhile he enjoyed the hospitality of the Rev William Mumford and his wife, at whose table he learnt and enjoyed the local cuisine.

Before a year had passed an earthquake had again caused damage to the building but the greatest disaster came in January 1880 when Basseterre was flooded by torrential rains that fell in the space of just a few hours. The church wall, located at the top of College Street, was subjected to a battering by the rapids that came down from the hills around Basseterre. Thirty members of the congregation were among the hundred that where lost on that day. As far as natural disasters go, the 20th century saw less dramatic events and in some cases the extent of the impact they had on the structure of the church was not always immediately evident. Such was the case when a number of earthquakes shook the island in 1952. In 1971, the church was closed down and services were carried on in the nearby school room. The roof was repaired and it was re-dedicated on the 14th November 1976 by Bishop John Knight. The hurricanes that attacked the island from 1989 to 1998 once again caused damage that was very visible and very expensive.

By 1969, the manse was in very poor state of repair. The building had deteriorated and while efforts were still made to make it habitable, it was recognised that a new structure would have to replace it. In 1977 the Church had to rent a house for the minister and his family and in 1982, on the 250th Anniversary of the creation of the province, a building committee under the chairmanship of Rev Leon Matthias was nominated. Patsy Matthew drew up the plans for the new manse. The Provincial Board approved them in 1983. The old manse was finally demolished in 1986 and the new one dedicated in August of that same year.

The Moravian Church has always been a solid and functional building. In 1948 a new bell arrived at the church and later that year Mr and Mrs H. B. Thompson and Miss Annie Baker donated a clock to the Church in memory of Sister Mary Davis. In 1955 the manually manipulated bellows of the old organ were motorised and in 1992 it was solemnly and lovingly retired with an evening of music and song that said good bye to the old and welcomed the new Rogers 735 organ.

The building and the congregations it served also experiences significant events that were a sign of the changing times. In 1920, the Zion Moravian Church had its first Afro-Caribbean Pastor. He was the Rev. Archibald Theodore King. He was succeeded in 1922 by the Rev. Walter Mansfield Williams who during the labour disturbances of 1935, was one of those attempting to calm the situation and in 1953, Mrs E. Maud Gubi became the first woman to conduct a service at Zion.