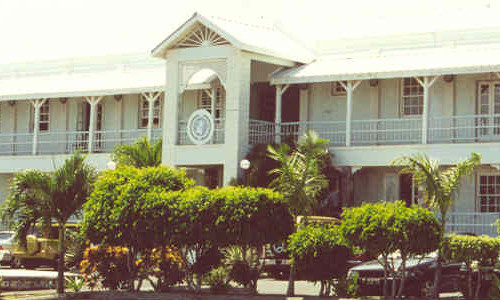 THE CUNNINGHAM HOSPITAL was located on the Western side of Basseterre on land that was now occupied by the the Clarence Fitzroy Bryant College and the Public Library. This was not the first hospital on the island. De Poincy had built one soon after his arrival in 1639 but it was destroyed during the wars of the 17th century.

Health on the Plantation

At a time when the lives of the many were at the mercy of the few the responsibility of caring for the sick and the injured rested within the plantation. The majority of the working population was by law the property of the estate owner who had bought them and as such had to take care of them. In 1784, the Rev. James Ramsay himself a surgeon and Anglican minister in whose charge were the parishes of Christchurch, Nicola Town and St. Johns, Capisterre described the situation in his An Essay on the Treatment and Conversion of African Slaves in the British Sugar Colonies. He also writes about the conditions under which enslaved women gave birth

As the abolition movement gained ground it was felt that measures to show that slaves were well looked after had to be put in place. In St. Kitts this resulted in the passing of a law in 1798 which among other things made provision that every owner or director of slaves shall have under the penalty of one hundred pounds on the estate or place where the slaves usually reside a commodious Hospital or sick house with proper conveniences for the sick and a sufficient number of attendants and shall under the penalty of twenty shillings either in his own person or by some white person under his direction attend as often as may be requisite at the hospital or sick house to see that the sick are furnished with the medicines that may be ordered for them by the said practitioner .. . and also with such diet as the said practitioner or his assistant shall reasonably direct to be given. Passing a law was one thing, enforcing it was another especially since those who would have had to see to its enforcement were planters themselves.

The arrival of Emancipation in 1834 forced a rethinking of the situation but it was not till 1848 that St. Kitts had a hospital once again. This came about through the efforts of Charles Thornton Cunningham, Lieutenant Governor of St. Kitts from 1839 to 1847 and housed not only the hospital but also the poor house and the lunatic asylum. The place which was supposed to give refuge to "the destitute and friendless, labouring under the visitations of poverty and disease" was little more than a workhouse. In order to be admitted a patient had to obtain a ticket from the parish vestry. Act No. 673 dated the 20th July 1848 saw to its establishment under the charge of a Master and Matron. These positions were filled William Phipps and Mrs. Phipps who received an annual salary of £60 and £40 respectively. Howard M. Clifton was appointed medical attendant while Thomas Curtis was the dispenser. The actual care of the sick was often left to able bodied inmates, relatives or women with no training or education.

In 1854 a cholera epidemic had wreaked havoc on the new hospital. Dr. John Davy in The West Indies, before and since Slave Emancipation: Comprising the Windward and Leeward Islands Military Command; founded on notes and observations collected during a three years’ residence described the poor conditions at the hospital

By 1891 the Cunningham was under the supervision of Dr. W.J. Branch and his assistant. There was also a Dispenser and a housekeeper, 6 day nurses, 6 night nurses all female as well as 4 servants and 4 part time servants all males. Anesthetics prior to surgery were administered through an open mask by the dispenser or the matron. As there was only one medical practitioner at the hospital to see to the needs of the patients, he had to rely heavily on his nursing staff for support.

In 1918 the Nurses hostel at the Cunningham was completed giving each nurse a separate cubicle. It was hoped that since “the decencies of life can be observed” a better class of women could be attracted to the nursing profession.

On the 7th April 1919 the new maternity wing named the Semper ward was officially opened. It housed four beds, a delivery ward, a pantry and a bath and toilet. It was used for all deliveries that were difficult to handle at home. Private wards and a new operating theatre were completed in 1920.

Training was further facilitated by the appointment of a full-time Assistant Matron and Midwife. With an act regulating midwifery in place more trained nurses eventually started filling the vacancies at the hospitals and replacing the Nanas (medically untrained but otherwise experienced women who handled deliveries and post natal care) in the community at large thus making community care safer. At this time the nursing staff fell into two groups. The more prestigious positions at the Cunningham in St. Kitts and the Alexandria in Nevis - those of matron, assistant matron and district matron and health visitor were all held by English women. The other section called “native medical subordinate staff” consisted of the positions of the Head Nurse at the Pogson, the Master of the Leper home, the steward and dispenser, nurses, and assistant nurses.

The 1920s brought even further progress which began to reflect on the attitude of both patients and staff. Speaking of the Cunningham in 1923 The Union Messenger stated, “There is an appearance of comfort and happiness on the face of the inmates and the disposition to oblige on the part of the nurses was everywhere in evidence.”

While conditions improved in the hospital a great deal still had to be done in the community. A major concern was that of transporting the sick who would have had to travel “ five, six, or ten miles in quest of hospital attention... in an open wooden cart, drawn by horse, mule or donkey, without protection from the elements.” A major community effort was launched by Dr. J. Cramer and on the 27th of September 1934 the first ambulance arrived in St. Kitts.

Nurses training continued to be a priority but often one that was hampered by the lack of staff and the great deal of work that had to be completed on a day to day basis. Nurses were given a full practical and theoretical course in general training, midwifery and commonsense, the last according to Dr. Gillett being the most difficult to instill.

At this time the profession was open to girls, eighteen years or older who were in possession of a Seventh Standard School Leaving Certificate. Candidates were expected to train in the medical and surgical wards under the supervision of the nurse in charge. There were no lectures and learning came through observation and listening. Textbooks were a scarce commodity. A further six months of training took place on the maternity ward under the Matron’s tutelage and at the end of this period an exam that had been pre-set in England had to be taken. A further upgrade in nursing came in the 1940s with the introduction of a three year nursing education plan, crash courses for nurses who were already on staff and an increase in salaries. Those interested in making nursing a career had to complete training in England. In 1949, May Stevens of Nevis became the first woman from the state to hold the position of Matron of the Cunningham Hospital. In 1949 through aid from the West Indies General Training Scheme, health care staff was provided with training which was to stand them in good stead both at the hospitals and at the new health centres that opened in Basseterre, Cayon and Tabernacle two years later.

Besides the Maternity ward, which was in a separate building, the main structure of the Cunningham Hospital housed a male septic ward and female septic ward downstairs. Adjoining then was the dispensary, a theatre and offices. Upstairs there were male and female aseptic wards, five private rooms, the main operating theatre and a small children’s ward. Mental cases were treated in another building until provision for them was made at the Cardin Home. From 1940 tuberculosis patients were treated in a ward on the upper floor of the same building. By then there were 112 beds The Cunningham continued to serve St. Kitts till 1967, when the J. N. France Hospital was opened. The Cunningham becomes a School

In the years that followed the move to the new hospital, the education system in St. Kitts was undergoing some dramatic changes. One of these involved the setting up of a junior high school and a teachers training college. The buildings of the old hospital were used for the purpose. However as their condition deteriorated and technology became such an integral part of education, it became clear that the structures would suffer from overload and that they had to be replaced. In 1986 a decision was taken to combine the the various divisions of post-secondary education under one administration but this was difficult to accomplish successfully when the physical facilities were not available. In 1996 a new St. Kitts-Nevis College of Further Education was opened on the premises of the old hospital at Burdon Street.. It was organized in four divisions - Teacher Education, Technical and Vocational Education and Management Studies, Health Sciences, Arts, Sciences and General Studies (including Adult and Continuing Education). A division of Hospitality Studies was added later. In 1997 the college was renamed the Clarence Fitzroy Bryant College after the Minister of Education who started the transformation of education in St. Kitts-Nevis.

The complex also became the new home of the public library which had been destroyed in the Court House fire of 1982. In 2000 this building was named the Charles Halbert Public Library in honour of a man who, though not a teacher, attempted to educate the people of Basseterre in matters that were not then part of the education curriculum.