Co-Cathedral Of The Immaculate Conception 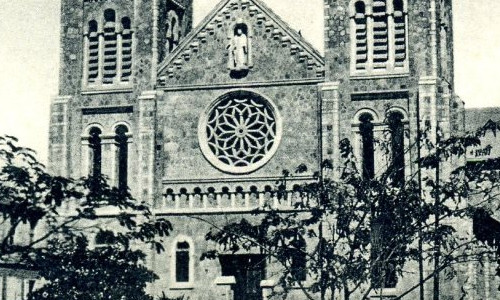 CO-CATHEDRAL OF THE IMMACULATE CONCEPTION is an ornate church constructed out of grey stone and located on the eastern side of Independence Square. In the early years of the French occupation of St. Kitts, the Jesuits had build a Roman Catholic Church and dedicated it to Our Lady. Notre Dame was burned in 1706 during the Anglo-French war and rebuilt later as St. Georges Anglican Church. The catholic congregation in St. Kitts diminished drastically in the years following the Treaty of Utrecht.

In 1713 the English forbade public worship of the Catholic religion in St. Kitts. Wealthy Catholic families erected cupolas on the tops of their houses as a sign for other catholics to come and worship. Only two such buildings remain in Basseterre both on Liverpool Row.

In 1829 an act was passed to remove some of the discrimination against the small number of catholics that were still present on the island. From time to time, the priest in Montserrat visited St. Kitts then in 1842 when Fr. Hugh McShane was appointed the first priest to serve on here. The Catholic presence was greatly enhanced by migration from neighbouring French St. Bartholomew and later by the presence of Madeiran indentured workers . To accommodate the growing numbers a church was to be built. This got underway in 1852 but progress was painfully slow as funds were scarce, Though the walls went up they remained exposed to the elements for too long and they could not support a roof. Fr. Philip Lynch completed the structure by buttressing them and putting on the roof. The Bishop in Roseau Dominica donated the 14 stations of the cross and a statue of the Virgin Mary.

By 1885 the building was  in a dilapidated state and could not accommodate the growing congregation. The Fr. Peter Smyth embarked on the project with an impressive ceremony of the blessing of the new foundation. It was attended by the Bishop and the parish priests from Antigua, Montserrat and St. Eustatius. Embellishments to the new church followed.

In 1895 a new bell was bought and in 1899 the organ of the church in Antigua was sent to Basseterre where it stayed till a new one replaced it in 1919.

In 1901 a new set of Stations-of-the-Cross was purchased and in 1903 the statue of the Immaculate Conception was enshrined in the church. However the tropics tend to play havoc on construction material and in less than 20 years the church was again in need of renovation.

In 1923 when St. Kitts was celebrating its first settlement, Fr. Rabaey reminded the congregation that the centenary of Catholic emancipation was due to be celebrated in 1929 and expressed the hope that a new church could be built by then.

Plans were drawn up in 1925 and exhibited to the public the following year. Contributions were received and Fr. Claeys thought it was time to assemble the construction material. He started by purchasing squared stones from Nevis.

In January 1927, the old church was emptied of its furnishings which were moved to the nearby hall that was to be a temporary place of worship. Demolition started on the 1st February. Pavement tiles where removed carefully so that they could be used again in the new church. Construction on the 17th March 1927 and was completed in less than two years. The new structure was dedicated on 6th December, 1928.

In 1981, the church was elevated to the status of co-cathedral within the diocese of St. John’s, Antigua.