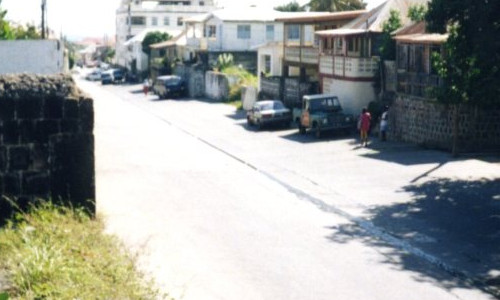 When the tiny settlement of Basseterre was founded in 1627 College Street was very likely its western boundary but with the growth of the population and the construction work undertaken by Governor De Poincy, the settlement gradually grew into a small town.

College Street got its name from the Jesuit College which was erected north of the town (now Douglas Estate). The Jesuits had replaced the Capuchins in 1642 after De Poincy expelled them for what he considered to be interference in the very volatile politics of the island.

By the end of the 17th century, numerous battles were fought for the control of the island. In 1713 under the Treaty of Utrecht, France was required to give up its interest in the island and St. Kitts became a British possession. The land that had formerly belonged to the French became available for settlement by others but some of it had already been occupied. A number of poor people settled in College Street. Among them were Darby Sullivan, John Perschon, James Mitchell, Thomas South, Thomas Norman, Mary Barry, William Price, James Neale, John Papin, Peter Duey, James Goffe, John Mackenze, and Christopher Mardenborough who together petitioned the Commissioners who were appointed to sell the French lands to allow them to keep the land they had settled on. The Commissioners however thought the property was too valuable to be left in the hands of a few poor families. Instead they were given land near the Salt Ponds on the South East Peninsula where they and their descendants were left to eke out a living as best they could.

At the bottom of College Street there was a customs house at the beginning of the 19th century. At this point it is not clear when it was erected there but it might have happened soon after the English take over of the island. This location placed it close to Church Street, which was the centre of administration for a number of years until the Court house was erected in the Square in 1792.

However College Street has a history that is closely linked to its geographical location. The street is actually located in a ghaut or a river. The rainfall in hills above St. Peters, that collects in the Olivee's and Fountain Rivers flows down College Street.

On the 12th April 1792 the St. Christopher Chronicle published this story which was reproduced in the Cornwall Chronicle and Jamaican General Advertiser 23rd June 1792.

On Saturday night we were visited by one of the most dreadful calamities that has been experienced in this devoted island.

We had for several days before frequent showers of rain: but on that night it fell so heavy that it appeared to come down as sheets of water.

A little before ten a prodigious flood came down College Street, carried away or greatly damaged every home from Lt. General Lossack’s estate to Mr Jules house near the little market; it took a little turn a little above this house, carried away the parsonage house, and all the small ones adjoining, burst with incredible violence through the church which providentially (being a large body and very strong) divided it into three streams; one took its course towards the gate that leads into Cayon Street and forced its way through Mrs Byrnes and Mr Queely’s yards and then into Cayon and Church Streets.

Another of the tremendous bodies of water passed a little to the eastward of the former and lodged against all the houses from Church Gate to the unfortunate Mrs. Tudor’s late dwelling.

The third went round the Eastern Part of the Church and ran directly into Mr. Skilling’s yard, from hence meeting no outlet, it passed into Captain Ford’s and Captain Slegg’s yards where, meeting with the same opposition as Mr Skillings it forced away the fence and an out house of the editor’s. At this critical moment the families of the above mentioned house were retired to rest and were unacquainted with their danger. The Editor and family alone were up who, finding the pressure of the water and the quantity that was forcing itself through the crevices immediately through every door open. The water flowed breast height with prodigious force through three doors in the front of the house, that emptied the water into Cayon Street, which at this time ran beyond the power of a mortal to describe.

Outhouses, lumber, casks etc were then flowing into the editors yard that it was with great difficulty they were kept from choking up the passages for the tremendous body to pass that entered the back of the building. In the situation he continued some time till when the flood was at its greatest height and when he did not expect to stem its violence any longer, Mrs. Tudor’s house gave way and made a large breach for the water at the same time as Captain Slegg’s house, which was occupied by one of his negroes, who was carried away in the house, but was providently saved in the market adjoining the printing office, went.

Poor Mrs. Tudor, who lately buried an amiable son, has now to lament the untimely loss of an amiable daughter. The mother and son were happily taken out of the surf – they were much bruised, but are a fair way to recovery. But Mrs. Tudor has not been heard of since – she rests with the dead.

Two daughters of the late Mrs Jane Lewis who died about four weeks ago were also in the house; one of them shared the fate of Mrs. Tudor, the other was saved in the square.

Another catastrophic event took place in 1880. On the night of the 11-12th January 1880 the dangers of College Street were made vividly and fatally clear. The Official Gazette of St. Christopher estimated that 36 inches of rain fell in less than six hours. Two hundred thirty one persons lost their lives but only one hundred sixteen were actually recovered. The whole of Basseterre suffered sever damage but the buildings on College Street were torn from their foundations and carried to the sea. The water mains broke and water from the reservoir added to the already significant damage which extended all the way across Pall Mall Square (now Independence Square). In his report on the protection of Basseterre against flooding, Captain S Arthur Alexander of the Royal Engineers then in Antigua, blamed the disaster on the poor choice of location for the town. He said that it was on the flood plain of a number of small rivers that flow from the surrounding hills but it should have been located on the bluff occupied by Fort Thomas and extended into the estates of Limekiln, Buckley and La Guerite and recommended that the town be relocated there. However realising that this might not have been feasible he made a number of suggestions which included the clearing of the land between Market Ghaut and College Ghaut of every structure and strong retaining walls built particularly on the Eastern Side of College Street between the Moravian and Anglican churches. Civil Engineer Blanc saw the flooding as a consequence of neighbouring estates not clearing accumulated sand and debris, This was an ever present task. In 1886, the Executive Council was informed that such sand was removed to the yards of houses in New Town and to Lucas estate (once located in the area now occupied by TDC hardware store.)

In 1884 the necessary law for the protection of Basseterre against flooding was passed, It gave the Governor-in-Council the authority to acquire the land to be cleared as long as its cost, along with the cost of construction of the retaining walls, did not exceed the vote provided for this project. The intention was to follow the directions set out by Captain Alexander. In 1885 the Governor was empowered to raise the necessary funds through debentures. Acquisition of the land started in 1888 (Recorded in th St. Christopher Register Series 4, Vol. D) and resulted in the widening of College Street to its present dimensions. Despite these changes when the rainfall is very heavy, flooding continued to occur as in 1924

For a number of years a culvert allowed the water coming from the hills to trickle down the Ghaut and into the street to the sea. However after Hurricane Hugo a bridge was built linking the top of Market Street to the top of College Street removing obstacles that might have hindered the flow of flood water as well as improving the movement of traffic. The wisdom of this decision was seen first during the passage of Hurricane Georges (21 Sept 1998) which lingered over St. Kitts for a long time and caused considerable water damage. It was further emphasised on the night of the 28th November 1998 when an enormous amount of rainfall in just a matter of hours again caused flooding in College and Market streets and spread mud throughout most of central Basseterre. The torrent was such that it covered the bridge for a while and when it subsided. People crossing the bridge on their way home from a concert at the Basseterre High School could see boulders being tumbled under it by the still turbulent waters.

College Street remains a place to be avoided when rain starts to fall even if the showers are light as it is not always possible to tell how much rainfall had already poured in the hills above Basseterre.