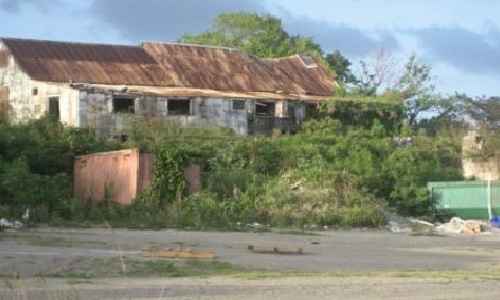 BUCKLEY’S ESTATE is located on the western outskirts of Basseterre.

In 1753 the plantation was the property of William Buckley. His only surviving daughter and heir Jeannette married Abednego Matthew (b. 1724). He was the son of William Mathew who in 1715 had been appointed Lieutenant-General of the Leeward Islands and from 1735 was Captain-General and Commander-in-Chief. His ancestors included other governors of St. Kitts and the Leeward Islands. When Jeannette Mathew inherited the plantation from her father in 1754, her husband became one of the wealthiest planters in the Basseterre region but a bitter divorce cast doubt as to the ownership of the estate for some years.

In 1817, when the first Register of Slaves was compiled, the Mathew’s estates were being managed by Thomas Chambers and employed 130 enslaved persons from very diverse backgrounds. These included thirty seven Africans which were mostly Ibo. Several were from the Congo and a small number were identified as Minna, Mucco, Bambara, Mandingo and Attam, all from the area of West Africa that is now Nigeria and Niger. Matthew was one of the few planters who encouraged the enslaved persons who worked for him to accept baptism. One of the cane fields on his estate was called Negro Church field, which may indicate that somewhere in the vicinity church services were held for the enslaved on Buckley’s.

It is not yet known how the plantation fared in the post emancipations era. In the 1850s the property was owned by George Buckley Matthew, who was a captain in the Coldstream Guards, Member of Parliament for Athlone and Shaftesbury and who also served as a diplomat. By then Matthew also owned Dewar, Diamond, Matthews and Olivees.

In January 1935, just before the start of crop, the workers at Buckley asked for a raise in wages. Those on the Wade estates had received a bonus in December 1934 and the ones at Buckley were expecting something similar. At that time the estate was the property of Brownlow Henry Hamilton Mathew Lannowe (1872-1964 a Lieutenant  Colonel in the Dragoon Guards who had served at Ladysmith, South Africa). His manager E.D.B Dobridge refused to consider this request. The labourers went on strike and then started calling out those on other estates. The result was two days of intense labour unrest that was put down with the rifle fire of the defence reserve. It left three dead, nine injured and a number of people under arrest. This was the first of many labour confrontations that were to sweep the Caribbean in the three years that followed. In 1938, the Colonial Office sent out a Royal Commission under the Chairmanship of Lord Moyne to investigate the causes of the disturbances. His recommendations included a revamping of the economy of the islands and the introduction of universal suffrage.

In 1975, after long negotiations with the planters, the Government acquired the sugar lands in an attempt to save the sugar industry from total collapse. The ceremony took place at Buckley’s as a way of turning a place of tragedy into one of victory and to commemorate the lives lost in 1935.