The University Centre and Technical College 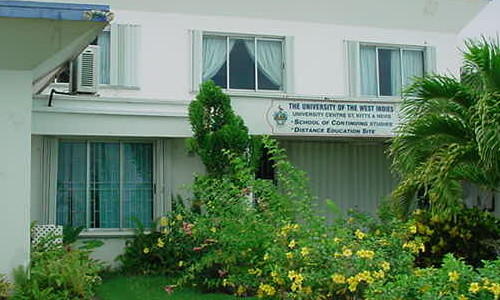 The University Centre and Technical College occupy an area at the western end of the Bay Road, just east of the War Memorial.

Although the western boundary of Basseterre stretched to Fort Thomas in 1768, only dwellings in Irish Town extended beyond Olivees Ghaut, now called Westbourne. Beyond those buildings was cane land belonging to Greenlands Estate which by the mid-19th century was the property of the Berkeley family. The part of the estate south of Cayon Street stretched right down to the Bay Road curving all the way round to Fort Thomas.

In 1854, news reached St. Kitts of a cholera epidemic making its way through the Caribbean. The Council immediately decided that should it reach Kittitian shore, burials will not take place in town. The land which was to become Springfield cemetery was still in the process of being acquired. By the end of the year the disease was wreaking havoc in Basseterre. The situation demanded emergency arrangments to deal with the number of dead. The southern most part of Greenlands estate took on a macabre role. For lack of more sanitary arrangements, the bodies of the deceased were buried in great trenches near the seashore in land which came to be called Cholera Ground. The area was used without the owner’s permission. In 1884, an American visitor described the gruesome sight caused by the waves. (James McQuade, Cruise of the Montauk p.111)

In 1890, Governor Haynes Smith proposed to buy the land from the Cunningham Hospital down to Fort Thomas to allow for the westward expansion of the town. By then Springfield Cemetery had been laid out and was in use and some raised concerns regarding the health risks posed by proximity to it. Doctors W. J. Branch and Alfred Boon assured the governor that the hills were a ‘sanitary location.’ He proposed that the acquired land just above the Bay Road would be laid out as an open space available as a recreation ground as has been done in so many cases in other places with disused burial grounds. Elaborating later he said the space would be laid down in grass with shady trees.

A botanic station was set up under the curatorship of C. Plumb. Unfortunately the site was not suited for such an endeavor as it was too close to the shoreline and salt from the sea breezes affected the plants that were grown there. Eventually the site was abandoned in favour of La Guerite located at a greater distance from the seashore. In October 1953, what was left of the old Botanic Station was cleared. The Sugar factory provided a bulldozer to remove the shrubs and terrace the garden. The plan was to create three grass covered levels with space for tennis courts and a playing field for children.

In 1955 the War memorial was moved from its original site, east of the Treasury building to the triangular plot of land bounded by Wilkin Street, Horsford Road and the Bay Front. In 1969 the building of an education complex was started on the site of the old Botanical Gardens. The University Center moved there from its previous home in the Newstead Building in 1970 and two years later the Technical College was officially opened.