St Thomas Anglican Church occupies the site of the first Anglican Church in the West Indies. The first building would have been made of wood and designed to hold a few English Settlers. Changes were made to it over the years to allow for larger congregations and to rebuild after hurricanes and earthquakes.

In 1622 St. Kitts saw the arrival of an English group of settlers lead by Thomas Warner. They came to build wealth by exploiting the natural fertility of the island. They were met by the Kalinago Chief Tegreman who allowed them to live on the island although regrets soon set in. In 1625, Warner returned to the island with more settlers and was accompanied by Master John Featly, an Anglican Minister. He would have been the first Anglican minister to serve on St. Kitts and the Eastern Caribbean. His sermons reflect a man who was trying to encourage good relations between the colonists and the Kalinago community on the island. In one of them he declared, “Our religion must as much teach the Salvages what we obey, as our precepts whom we obey. Our religion must be as well clad in Sinceritie, as our Strength in courage that so these ignorant infidels observing our religious conversation. May joyne us in a happy Resolution.”

This was not to happen, as in 1626 the Kalinigo were killed and survivors expelled from the island in what was called a preemptive strike. A few remained but control over the island passed completely into European hands.

The congregation of the church was English as reflected iby the names of prominent men in its cemetery.   Featly may have had plans to convert the Kalinago and make them part of the congregation but this did not happen. Similarly, enslaved Africans were not welcome into the Anglican Church until the late 18th century when, as the Established Church, it was spurred into action by efforts of Methodist and Moravian missionaries to minister to the enslaved and teach them through their Sunday schools.

The hurricane of 1772 was one of many that  damaged the building over the years. This is an account of what happened that year:
Part of the church roof beat in, and a piece of joist, supposed from Mr. Verchild’s estate about 600 yards distant, drove horizontally through the steeple, a little below the cupola, where it now remains. Part of the parsonage house laid almost on its side and the out buildings terribly wrecked. The damages supposed about 200L
When the hurricane began, the Rev Mr. Kirkpatrick and Mr. William Sanders were in the house and staid as long as their safety would permit. Mr. Kirkpatrick then got into an oven, which, to the great mortification of Mr. Sanders, just proved large enough to contain only one person, for he would very gladly have got into it if he could. As soon as the storm abated, Mr. Kirkpatrick quitted his retreat, which was instantly occupied by Mr. Sanders, who was determined to be no longer exposed to the unrelenting fury of the tempest; for he did not know but it might return. However, neither of the gentlemen received any injury than what proceeded from fright

The present church was built in 1860 according to the date in the church tower. It has an extended nave and a tower on its western end typical of British churches. The tower stood at approximately 41 feet and had a base of 14 feet by 18 feet. It was constructed of andesite stone and lime mortar and had an inner and outer wall. The space in between the walls was filled with packed rubble.

In 8 October 1974 an earthquake caused damage to the church. This account was reported by Learnice Mitchell and Dr. Susan M. Kenyon
Shortly before 6 am, Sexton Joseph Duporte was on his way to the church to ring the Angelus for matins. He had just reached Warner’s tomb when the ground shook, scattering stones all about him. Archdeacon Hodge, then Rector for St. Thomas, was leaving his rectory home in Sandy Point to conduct the service when his house shook. He remembers rushing back upstairs to check on his frightened family before hurrying over to the Church.

The church tower collapsed and the roof was seriously damaged. The damage to the tower meant that the bell it housed was left unprotected. The Parish placed it on the floor of the old tower but it was stolen and shipped off island. However the bell was quickly missed and the thieves were apprehended. The vessel carrying the bell had stopped in St. Thomas USVI where it was removed and returned to St. Kitts.

After an extensive fund raising campaign, the Church was repaired and its consecration took place in 2000. 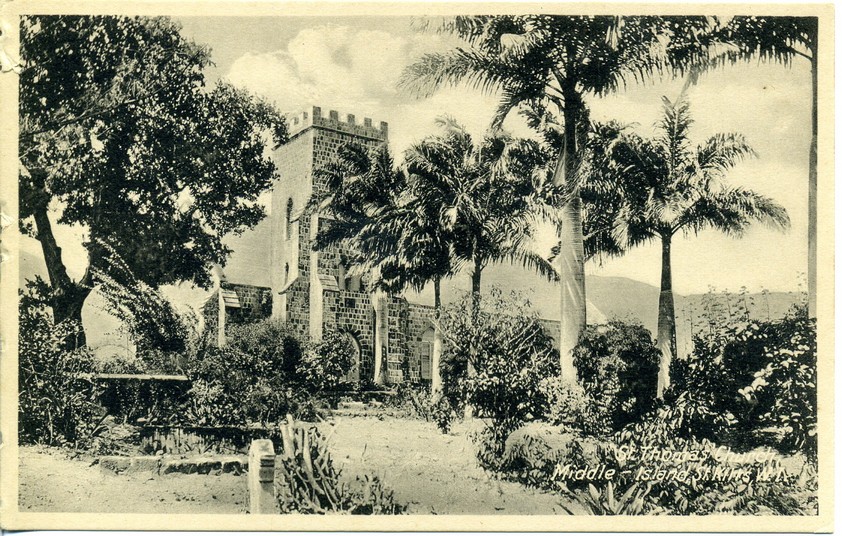 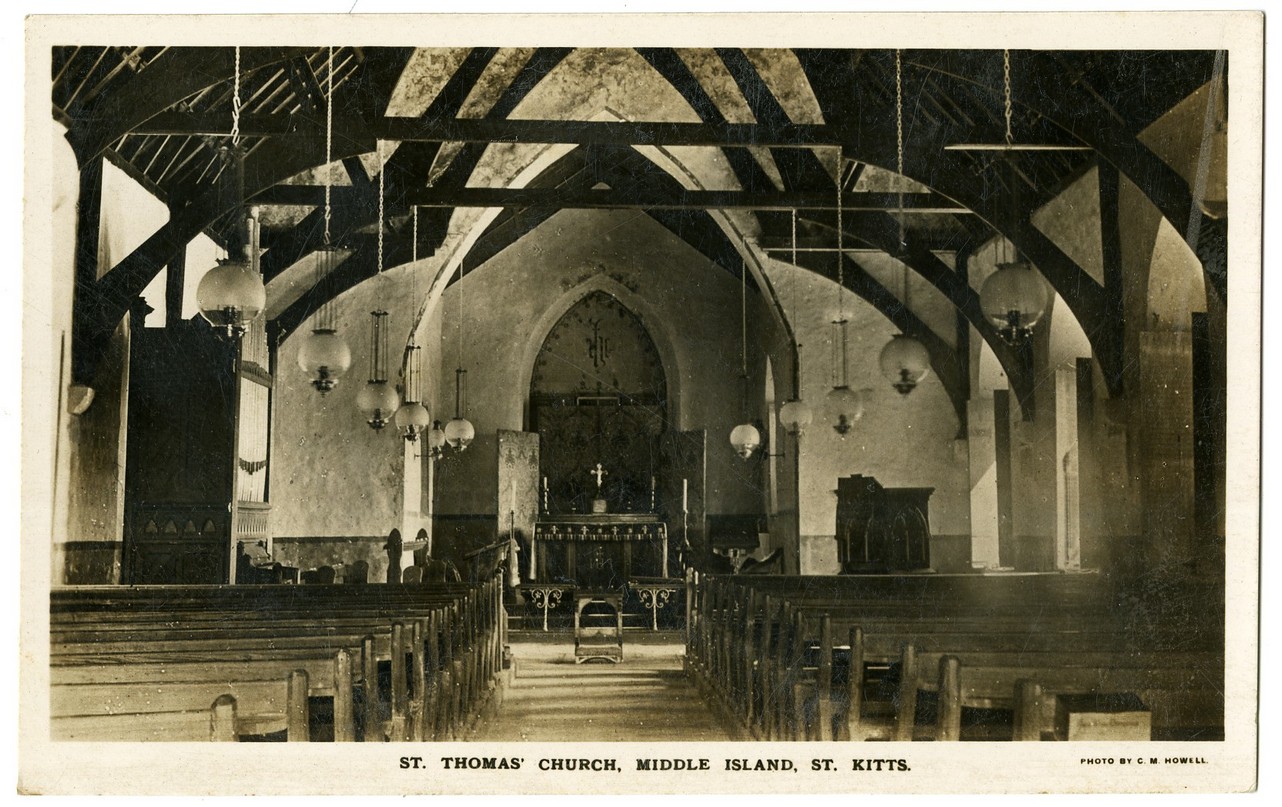 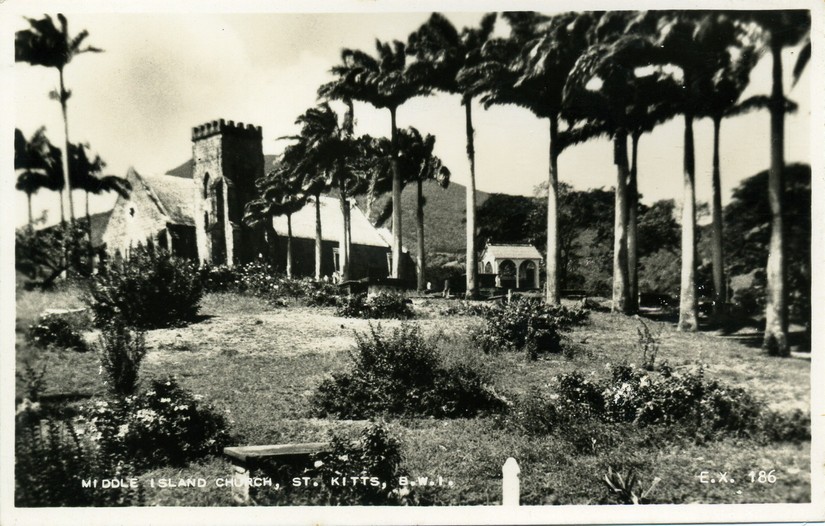 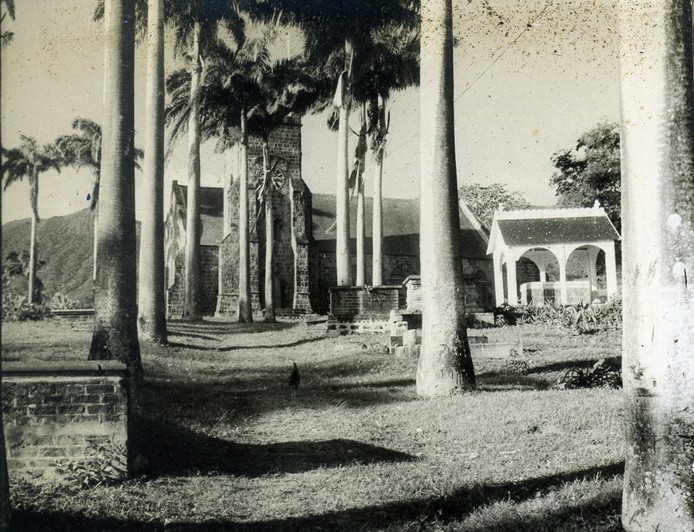 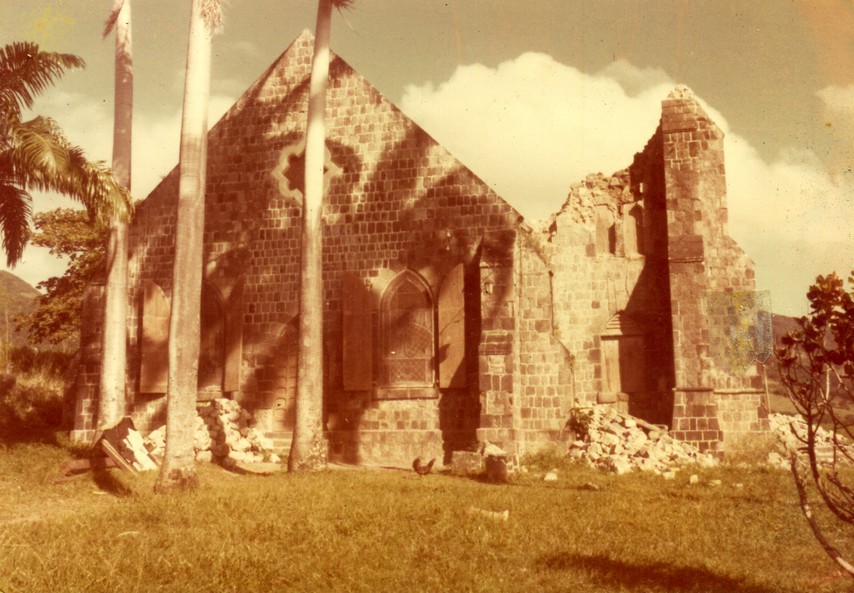 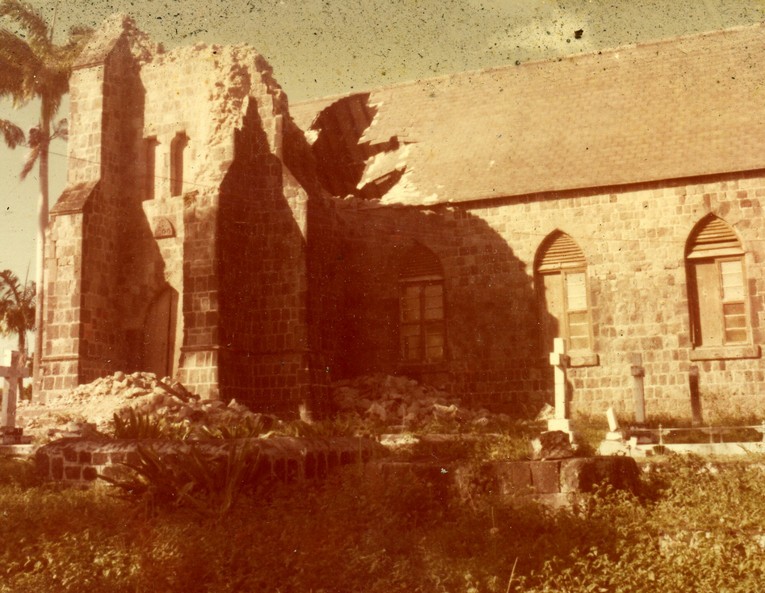