The Circus is the hub of Basseterre.   It is a recognised landmark and a popular meeting place.   The Circus owes its origins to the fire that destroyed Basseterre on  July 4th, 1867.  The whole town east of West Square street was devastated.  The inefficiencies of the fire department were, at least in part, responsible for the magnitude of the disaster.  When Basseterre was rebuilt, it was decided to make its streets easier for the fire truck to navigate.  Among the new arrangements were the widening of Fort Street and the laying down of the Circus.   In 1883 a memorial to Thomas Berkeley was placed at its centre.  Because it contained a fountain and a clock, and it was erected on a platform which quickly became a seating area, it encouraged the gathering of people in the Circus. 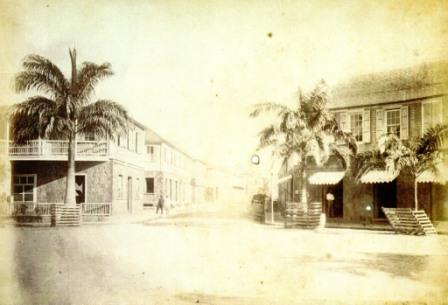