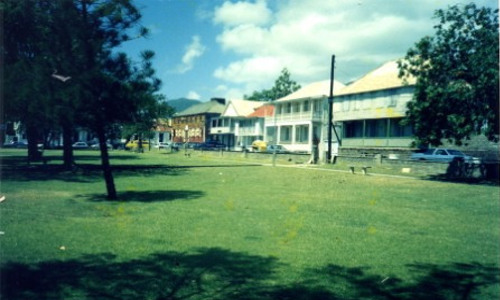 INDEPENDENCE SQUARE formerly Pall Mall Square, was renamed on the 19th September 1983 to commemorate the birth of the new nation of St. Christopher and Nevis. It is located on the eastern side of Basseterre bordering on Newtown. Its layout was designed to look like a Union Jack and the streets and houses surrounding it once dated to the mid-eighteenth century. Unfortunately, time and environmental damage have destroyed many of them. Some like the Court House and Public Library have been destroyed by fire and have been rebuilt.

The Square started its life as a pasture on the edge of town. A map of 1714 by Peter Bour, a French Surveyor whom the British employed when the French lands were being sold, shows a pasture just east of Fort Street with houses only on its western side. General William Mathew, who headed the Commission for the sale of the French Lands in 1728 had intended that the Pasture would have been kept for public use. However there was disagreement as to how this should come about.

In 1750, a law was passed to build a court house in the Square and concerns were raised about some individuals who had started to encroach on it from the North, East and South sides of the pasture. . The administration in St. Kitts felt it had every right to use it because of Mathew’s declaration but Gilbert Fleming, his fellow commissioner, and by then the head of Government objected. He reminded the Council and Assembly that all the French lands were deemed to be the private property of the King. He insisted that the Island Administration should either buy the land from His Majesty or ask his permission to build on it. Fleming even offered to pay for the land and donate it to the Administration which then objected that such a move would create obligations on its part. Despite this Fleming went ahead and bought the land and when the Administration refused to deal with him, he sold it to Alexander Home in 1753 and quickly bought it back in 1755. Fleming said that he was willing to sell or donate part of the pasture for the erection of a court house and sell the rest to private business men who would then build their business places there. However the Council and Assembly wanted the whole plot of land to use as a parade ground for the militia. Fleming’s argument that Fort Londonderry was nearby and could be used for parades was not accepted and the administration insisted on acquiring the whole pasture or none at all. On the 19th July 1758, Fleming accepted the offer of £1500 sterling for the land but preferred to move the two buildings he had on it rather than take the offer of £250 sterling that the Administration offered for them. The transaction was concluded on the 24th July 1758.

In January 1792 Webbe Hobson, was charged with finding a good location for the sinking of a well on the pasture. The purpose of the project was the “preservation of the town of Basseterre against fire and for the accommodation of the poor of the parish and for the Negroes of the island.” A subscription was to be taken to pay for the project. The Well was located In the small crescent-shaped piece of land on the southern side of the Square

In 1792, The Government acquire the property called the Tontine located on the South Eastern side of the square. It soon became a significant administrative building housing the offices of the Registrar, the Secretary, the Courts of Justice, the Assembly and the Council. Effectively, this meant that the centre of Administration had shifted from Church Street to the Square. An Auction House was also located in one of the buildings that surround the square but its exact location remains to be discovered.

The author of The West India Sketchbook talks of a slave market in the square where slaves went to sell the produce they grew or things they made. It was a gathering place where slaves actually met to interact with each other, something they looked forward to so much that missionaries had a hard time calling them to church on Sunday which then was market day.

From time to time the square became a parade ground where the militia went through its drills. However, because it was not enclosed and possibly because of the waste that accumulated during and after a market it was an attraction for roaming goats, pigs and dogs.

In 1825 Henry Coleridge, who accompanied his uncle, William Coleridge, Bishop of Barbados during his first visitation to the West Indies and acted as his secretary had a number of recommendations as to how the place could be improved.

In 1834, slavery was officially abolished and was replaced by apprenticeship. The end of apprenticeship in 1838 meant that persons who no longer wanted to work on the plantations could find work elsewhere. The population of Basseterre grew during this period and conditions became crowded. Realising that a clean, steady water supply was essential for a healthy and sanitary environment, the St. Kitts Legislative Council decided to bring pipe-borne water from Olivees into Basseterre in 1855. Penal labour helped to cut the cost of the project. The sum of £50 was placed at the disposal of the Commissioners for the Supply of Water to enable them to carry out the complicated improvements in Pall Mall Square.

When the project was completed a stone fountain was built in the centre of the square to commemorate this significant development. At the summit of the fountain there are three Grecian styled ladies and a small child. Surrounding the circumference of the fountain are lovely flowering plants

In 1872, Henry Booth, the English man who had been commissioned to build the organ at St. George’s, was charmed by the beauty of Pall Mall Square in the bright moonlight. In the 1880s the gardener for the Square was Abraham Brookes. Visitor’s descriptions of it show that it was flourishing into an attractive space that included some horticultural wonders. In 1884 James McQuade, an American visitor recorded his impressions in a book called The Cruise of the Montauk to Bermuda, the West Indies and Florida (New York, Thomas R Knox, 1885). Another American, W. A. Paton in his book Down the Islands (London, Kegan Paul, Trench and Co. 1888) also speaks of a tastefully laid out garden.

By this time, the Square was lit at night with kerosene lamps but these were replaced soon after electricity was introduced in 1928. Security measures during the Second World War included black outs, which meant that street lighting was not be used in order to prevent enemy planes and shipping from getting a bearing on the place. However after the war, the lights around the Square continued to stay off because the power plant then in use could not handle the demand. In 1952, the old plant was replaced by the Needsmust Power Station and the town was again lit at night.

In 1953, L. R. Volonterio, Superintendent of Public Works did much to improve the look of the Square. The paths were bedded with concrete and then surfaced with slabs. The small flower beds and short gravel walks which formerly encircled the fountain were replaced by larger beds intersected by paved walks designed by Volonterio himself. On the north-eastern corner, a 40 year old evergreen, a type of Banyan was removed. It had reached such a size that it covered one-eight of the area of the whole square. Its shade was much enjoyed on sunny days but its low overhanging branches caused some concern especially at night when the reckless took advantage of the lack of visibility to do mischief and some said "jumbies" lurked in its shadow.

A number of prominent persons have lived on the Square at various time. Sir Maurice Davis occupied a house on West Independence Square Street. It is presently a parking place for National Bank. Doris Wall and her family occupied the Georgian house on South Independence Square Street. It was later the home of Professor Bryan King. The house of the water engineer was located on the northern side of the square. Its last occupant in this capacity was Stanley Sebastian. Today the building is abandoned.

In 1995 hurricanes Luis and Marilyn destroyed most of the larger, older trees in the square. These have been replaced with ficus, (Ficus Plantae) and frangipani and other species. One of the most interesting trees which had been planted, was a large Talipot palm near the north-west corner. These palms native to Sri Lanka grow slowly and live for thirty to sixty years flowering once in their lifetimes before dying. Their blades may be up to sixteen feet across and they possess the largest compound inflorescence, or flower head, in the plant kingdom. Once they have flowered, round dark-green fruits fall by the thousands when ripe and then the tree dies. . The one in the Square flowered in 2006.

Today the Square is the venue for many one day cultural events. Although most of the buildings surrounding it have changed from private residences to commercial buildings, many locals and tourists still just sit on new benches which have replaced the old ones and enjoy the lovely new trees which are being replanted. The location remains a calm green space in a town that grows increasingly hot as it attempts to cope with the demands of the 21st century.