There were two Spooner plantations on St. Kitts. One was in Christ Church and seems to have been known by various names. These notes focus on the one in St. Mary’s.

The land that became Spooner’s seems to have been (at least in part) the property of Captain Paul De Brissac. In 1706 De Brissac, who was probably a French Huguenot, claimed for damage suffered during the French attack of 1705 in which he lost six enslaved workers valued at £204 and cattle and horses worth £203. The invasion had also caused damage to a number of buildings on his plantation. These included his house, a boiling house and still house and a mill. He also claimed for 25 acres of plant canes, 50 acres of ratoons and 8.5 acres of young cane valued at £1129. The claim did not give the exact location of the property. ( Report of the commission to enquire into losses sustained by inhabitants of St. Christopher and Nevis during the French invasion 1706 TNACO243/3 page 458) The Bour map of 1714 shows De Brissac was still the owner of land in the hills in the Cayon area. Paul De Brissac died in 1719 and the plantation became the property of John Spooner soon after.

John Spooner was the first of his family to be connected with St. Kitts. He was Solicitor General, and later Speaker of the Assembly. The earliest mention of him on the island came in Sept 1711, when he and John Pinney were appointed by Governor Walter Hamilton to take evidence from witnesses about complaints against him for a report to the Council of Trades and Plantations. Hamilton described Spooner as

Solicitor General of these islands, and a verry worthy gentleman...  he is a person very capable to inform theire Lordships about the state of these islabds, and in particular as to my conduct.

Hamilton went on to recommend that Spooner should be granted land formerly in possession of Governor Douglas.  In 1723 the Brissac lands that Spooner had acquired were in dispute.  The lands of a Monsieur Salanave, a neighbor of De Brissac, had been granted to Daniel Cunningham.  This grant also included some of the Brissac property.  A report from the committee of the Privy Council agreed with Spooner's claim and an order-in-council confirmed his ownership of the land.

However in 1726 the Commissioners for the sale of the French Lands arrived in St. Kitts and those holding land in the former French parts of St. Kitts were made to pay for them. On the 24th Aug 1726, Spooner appeared before the Commissioners and offered to buy the plantation in St. Mary’s at the rate of £7 sterling per acre. The Commissioners expected £10 per acre which had been the offer on the adjoining plantation. Spooner asked for time to show that the land was not of the same value as that adjoining it. He also produced a document dated the 16th June 1722 signed by General John Hart (Governor of Leewards 1721-1728) to show his right of possession. This put him in conflict with William Woodley, who was attempting to buy several plantations which may have included the one that had been given to Spooner. Woodley refused to be in the company of Spooner except at public land auctions.

17 Oct 1726 John Spooner appeared before the Commission to settle his accounts but it was noted that the land allotted to him was a little over 78 acres. This was 14 acres more than had been agreed upon. The commission’s surveyor pointed out that six acres of it was steep, rocky and barren. Since the Commission felt that he had been over charged for the rest of the land he had bought, it was agreed that Spooner should only pay 25 shillings per acre for the additional acres. He paid £658 1s 6d for all the land purchased.The commissioners did not insist on any new buildings as ‘sufficient being already erected.’ Spooner seems to have caused a great deal of anxiety for the commission. They were suspicious of his claims and his intention to pay for the land. Despite all this John Spooner became the owner of a plantation in Christchurch. two in St. Mary’s. and one in St. George’s

He died 1758. His will, was written in 1754. The document was dominated by the marriage settlement of his eldest son, John to the heiress Mary Fortescue. (1710 – 1752). The will was not specific about which plantations in St. Kitts formed part of the settlement. The estates in St. Mary and Christ Church St. Kitts ended belonging to his third son, Charles who took his responsibilities seriously.

It was during Charles’ ownership that a hurricane caused a great deal of damage in 1772.

The Water-mill was almost torn to pieces, several other buildings damaged, the dwelling house a little stripped, negro houses mostly, if not all, down and the crop something hurt.

Charles Spooner showed great concern for the survival of the plantation.  Some might have been caused by the trauma caused by the Hurricane.  His will stated: in case of Hurricanes or violent storm whereby buildings shall be blown down or greatly injured or whereby great damage or destruction shall happen to the same Estates respectively or to the stock thereof to raise by mortgage of the same plantations and estates respectively or other usual ways and means such sums as shall or may from time to time be wanting to repair or make good the damage or destruction so done or happened to the same Estates or the buildings and stock thereof respectively and thereupon to apply such monies so to be raised accordingly and which sums so to be raised are to be raised and paid as herein before mentioned.

In 1817, William Jordon, manager of the properties of Charles Spooner made a return of the enslaved working on the various Spooner estates. It showed a total of 139 workers and those who were able to work were all engaged in plantation duties. There were no house slaves. This meant that the managers had to look after themselves or purchase or rent enslaved workers for their household needs.

Charles ensured that both his wife Mary (nee Burt) and his sister-in-law received annuities from his estates. As he was childless, he left his estate in St. Mary’s to his nephew, Hungerford Spooner.

Hungerford Spooner died in 1819 leaving no legitimate male heir so the estates devolved on the Shaw branch of the family. In 1823 Peter Theodore Shaw and his son Peter Spooner Shaw mortgaged the properties to the firm of Manning and Anderdon Originally, a mercantile firm trading with the West Indies, Manning and Anderdon owned several other estates in St. Kitts and the Caribbean.

The years that followed Emancipation in 1834, saw Spooner’s, Cayon passing from one owner to the next.

J W Freshfield sold it to John Hopton Forbes, in trust for William Beckford and John Rankin in 1837.

John Rankin’s heir in 1844 was his niece Janet Davidson from whom the property passed on to William Adam Davidson.

In 1855 Davidson sold it to Nicol Graham Graham to clear his debts. Graham was a colonel resident at Jarbruck, Dumfriesshires, Scotland.

On his death in 1858, the property went to his son Ivan Cunningham Graham then resident in Guernsey.

In 1862 he in turn conveyed it to Francis Wigley and Archibald Paull Burt (the first Chief Justice of Western Australia). They were a legal firm that was becoming involved in plantation ownership.

From Wigley and Burt it passed into the ownership of Mary Hamilton Laing in 1863 (SKNNA St. Christopher Register Series 4, Vol. W, doc 21290). Laing seems to have been the grand-daughter of Thomas Clarke Trotman, owner of Bulkeleys, Carmichaels and Valley estates in Barbados. An indenture drawn up in 1872 between Mary Hamilton Laing and Robert Baxter Rose gave Rose an interest in the property.

In 1876 Robert Baxter Rose sold Spooners to Solomon Abraham Wade. All the changes in ownership could not have been healthy for the estate and its workers. The Rose to Wade sale ushered in a more stable period with regards to ownership but with prices of sugar fluctuating dramatically, the industry itself was in an unpredictable state of affairs.

Solomon Abraham Wade’s (1801-1881) was the son of Abraham Wade probably of St. Martin and his wife, Frances Paget, the daughter of the Rev Thomas Paget of St. Thomas Middle Island. He seems to have started out in small business which grew into the partnership of Sandall and Wade. Wade also went into plantation ownership

Solomon bequeathed Spooners to his son, Ethelbert whose will passed it on to his brother Paget who converted the sugar factory there to a cotton ginnery in 1901. Amy Wade, his wife continued overseeing the work at Spooners and other Wade estates. Their son Charles Paget Wade inherited most of the estate from her. He was more of an artist than a business man. The death of his mother forced him to pay attention to the management of Wade Plantations, the company created to manage the Wade estates in the Caribbean, and the source of his income.

In 1938 the cotton ginnery at Spooner’s was destroyed by fire. Wade Plantations Ltd replaced it with a new ginnery and oil refinery in 1940. The new establishment had 4 gins with a capacity of 1600 lbs lint per working day. Cotton seed was used for making other products. Oil was extracted from the cotton seed. It was refined and sold as cooking oil. More solid fats were manufactured into soap and the remnants of the seeds were turned into fodder for the plantation livestock

In 1950 the wages on the Wade estates were as follows

Spooner’s ginnery seems to have been in operation till about 1964 after which date it stopped featuring in the company’s accounts. Spooner’s was one of estates acquired by government in 1975. 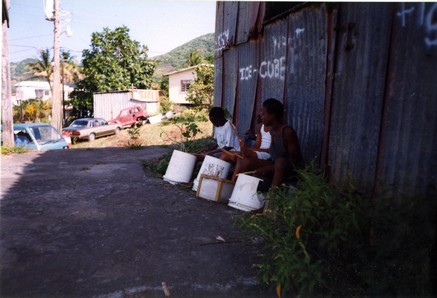 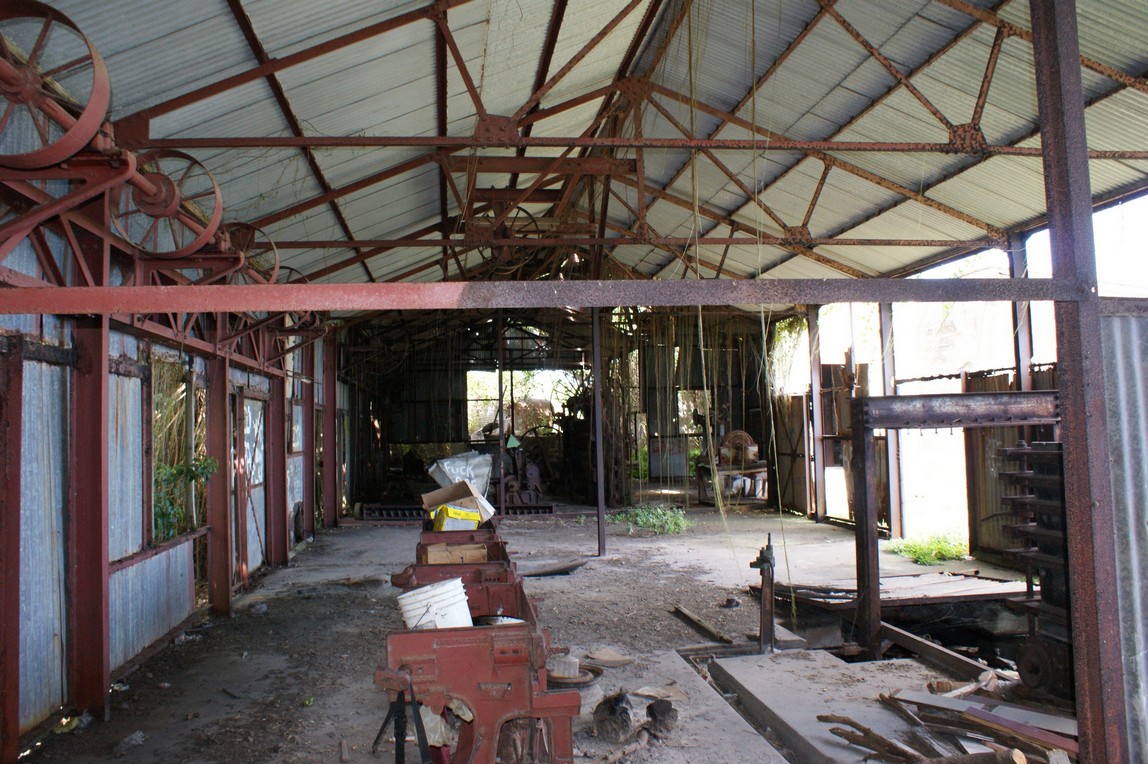 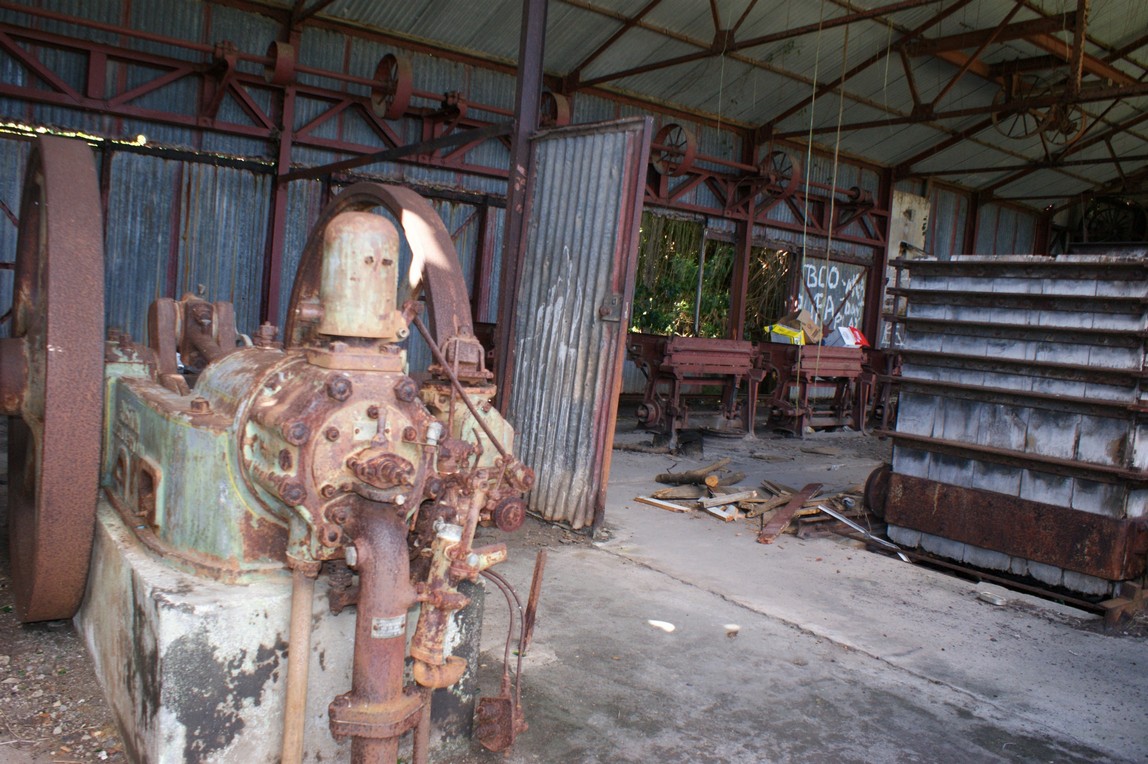 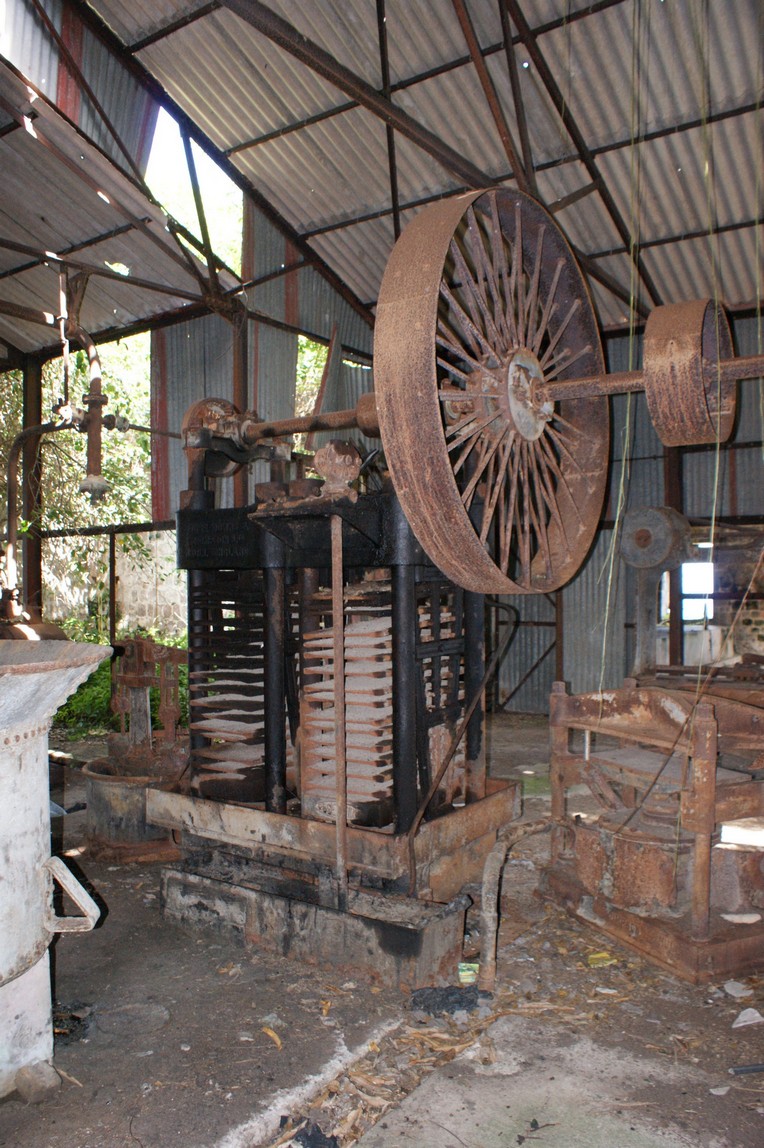 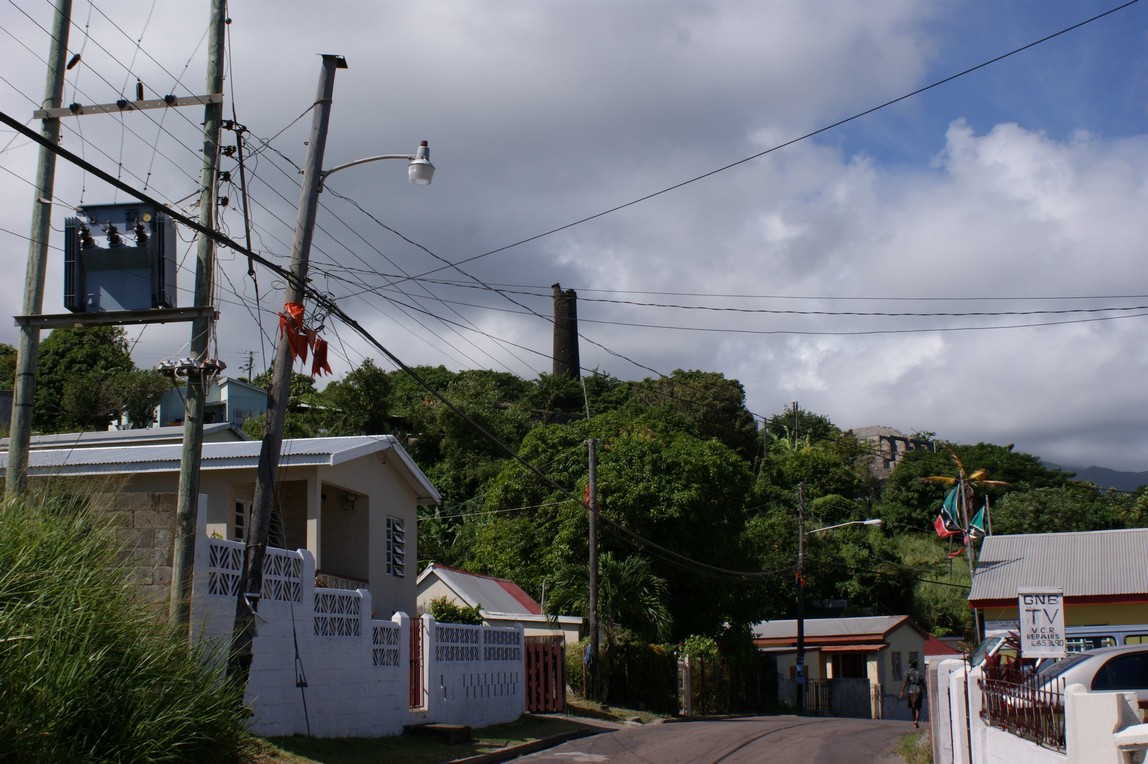 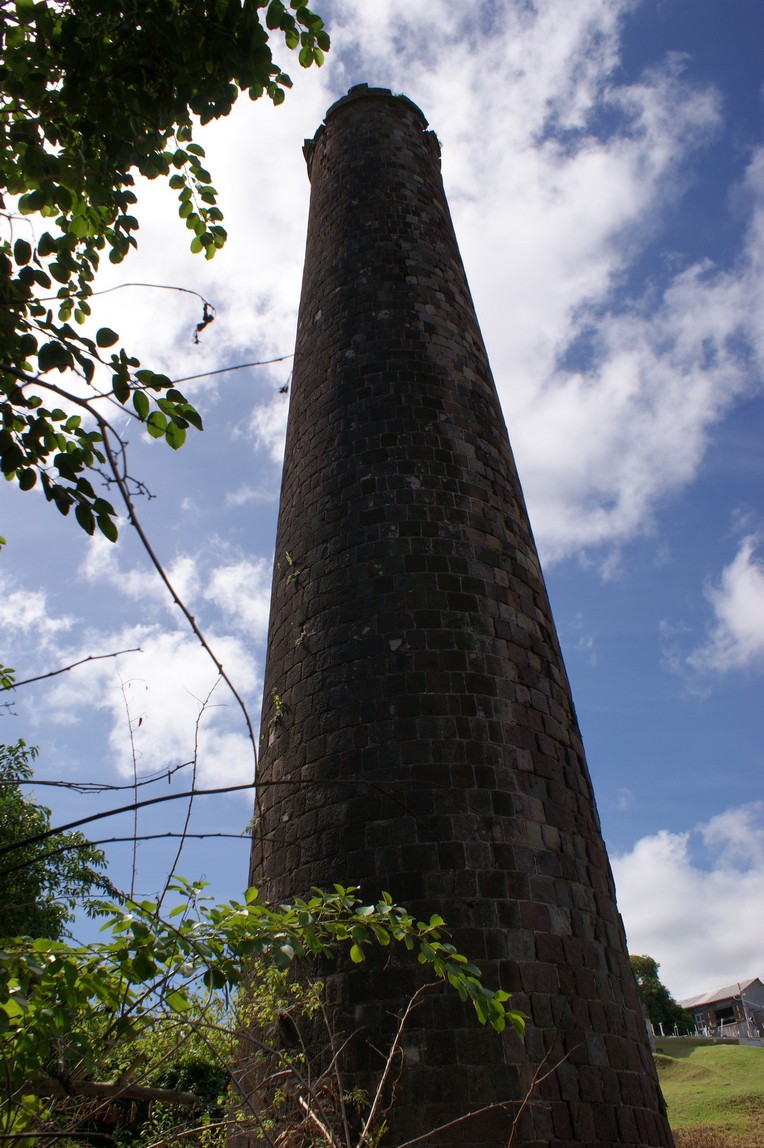