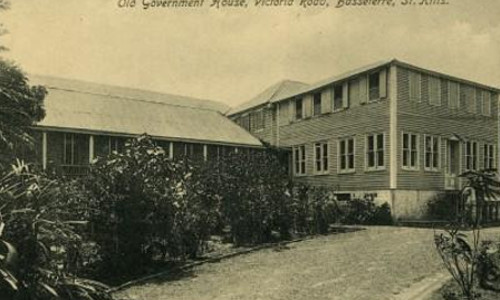 The Youth and Community Centre on Victoria Road stands on a foundation that survives from the first Government House of St. Kitts.

For a long time St. Kitts did not have a Government house as many of the Governors and Lieutenant Governors were natives who had their own private residences on the island. John Nugent was an exception. He owned property in Montserrat and resided in the Leewards for several years. Soon after his arrival, both the St. Kitts Council and the Assembly agreed to rent the house belonging to Webbe Hobson with all its furnishings for the cost of £100 current money for the first month and £50 current money for as long as the Commander-in-Chief occupied the place. In 1790 the matter of accommodation had to be dealt with again and this time it was decided that a house be rented at a sum that did not exceed £200 current money. The rental of a property for the use of the Governor continued to appear on the agenda of the Council and Assembly for a number of years. Finally on the 21st June 1816 both Assembly and Council agreed to purchase John Woodley’s house, at the northern edge of the town for the price of £4000 current money. The adjoining premises, then belonging to a Mr. Skelling was also to be procured for the sum of £100 per annum. The negotiations were completed in 1817 just in time to receive Thomas Probyn, who bore the title of Captain General and Governor-in-Chief over the St. Christopher, Nevis. Anguilla and the Virgin Islands and who soon set about trying to repair and build additions to the existing building.

In 1832, a committee appointed by the Council and Assembly to “report on what items and other necessaries may be required for the comfort of His Excellency, the Commander-in-Chief at Government House,” found the place “destitute of furniture and other basic requirements.

A plan of Government House drawn on the 10th May 1855 showed a house on a piece of land of a little more than one acre. On its northern side, a one hundred and sixty two foot fence separated it from the Moravian Mission while on the east, a wall measuring three hundred and eighty seven feet shielded it from the traffic of Victoria Road. An entrance gate was linked by a semi-circular path which lead to the two storey house and an exit gate. On its southern side, an irregular fence screened off a number of small wooden houses and on its western side, it was protected by a stonewall that separated it from College Street.

The public areas of the house were on the first floor and these consisted of two grand spaces which were occupied by the drawing room and the dining room opening on to a magnificent gallery to the front of the building. The second floor which was smaller in area housed two small bedrooms, a nursery and the governor’s private apartment which was also surrounded on three sides by a gallery. Large windows protected by louvers let air and light into the master bedroom and while board shutters that were hinged at the top and were held open at the sill served the same purpose in the other rooms.

The house faced east and overlooked a small flower garden. On the opposite side of the road were the cane fields of the Losack plantation. In the back, a number of smaller buildings housed the Private Secretary’s rooms, the servants quarters and the kitchen. Along the back fence, at a further distance were the stables and coach house. The property also contained a cistern and a well, which was 90 feet deep.

In 1858 a Council and Committee room measuring 15 feet by 18 feet was built and furnished. However Council and Assembly meetings continued to take place at the Court House, located in what was then Pall Mall Square.

The flood of 1880 caused major damage especially in College Street. It swept away the wall at the back of Government House. In November 1882 the Superintendent of Public Works, L. M. Kortright submitted an estimate of £550. 18s to the Legislative Council for work required at Government House. Major work was needed in the floor, and sides of the different rooms, the windows and doors. Some interior changes were also suggested. The Committee that examined the report felt that the new floors for the drawing room, dining room and hall were unnecessary instead suggested that, very little patching neatly done will render the condition of the floors of the dining and drawing room perfectly sound and their appearance will be better than with new wood unless the boards were sawn to order and left a considerable time to cure. The floor of the hall should be covered with a new floor cloth covering the whole width. They felt that the additional gallery would diminish the coolness of the bedroom and should not be constructed unless His Excellency desires it. They also recommended that a chandelier should be installed in the drawing room and sidelights in both the drawing room and the dining room.

On the 7th February 1894 Governor Haynes Smith raised the issue of the future of Government House with the Legislative Council. The Surveyor of Works reported that the Government House was almost uninhabitable. The roof leaked and in some places the wood had rotted and was in need of replacement. The building needed painting on the inside and outside. The Governor asked the Council to consider whether to repair the dwelling or build a new Government House with a ball room on the newly acquired Laguerite Estate. He suggested that if the latter option was agreed upon, Government House should be placed at the disposal of the Government Grammar School. A week later the committee appointed to consider the matter recommended that the dwelling be converted into a High School and a new Government House be erected on newly acquired land at a cost not exceeding £3000. However within a short period, economic difficulties made the spending £3000 to £4000 very extravagant especially as the House was only to be used at irregular intervals.

The difficulties being experienced in the sugar market coloured the debates of the Council as did concerns over alleviating poverty and creating employment while still attempting to balance the accounts of the colony. Ball rooms and chandeliers were set aside. Instead of a totally new Government House, repairs to the old structure were recommended. With the advantage of hindsight, Councilor Todd remarked that it would have been better if the house had been kept in repair in past years. The Blue Book of 1896 showed that a tennis court had been laid out on the grounds. No regular gardener was then employed, instead the grounds were weeded by labourers employed on the public street.

In 1918, with the end of the First World War in sight, the matter of restoring Old Government House was again on the agenda with the only proviso being that the island’s surplus reached the £10,000 mark. The Governor felt that the proposed plans should be submitted to an architect in England but the Executive Council disagreed as an English architect would know so little about tropical and local conditions,... that his advice would be of little value. Further the portion to be rebuilt is so simple - merely a two storey bungalow, without elaborate reception rooms - that local intelligence should equal to the task. In 1919 Administrator Burdon wanted the work started. He was especially anxious to protect the house from mosquitoes by installing gauze jalousies and wire doors in the dining room. He estimated that the work would take between eight and ten months to complete.

With much needed work at the Cunningham Hospital and the construction of a poor house receiving priority the work at Government House still had not been completed in 1921. However as Governor Fiennes wanting to visit the island, Burdon found himself in a difficult position. He was forced to leave Springfield, which was in a better condition, for the duration of the Governor’s visit and take up temporary residence at Government House. In a telegram he indicated that he was going to make the move but requested permission to retain one back room to lock up personal property and stores also to leave pure bred poultry in locked chicken run. However Burdon did not have any intention of being uprooted a second time and by the middle of the year repairs on Old Government House were started. Work began in earnest and a vote of £250 was devoted to the purchase of furniture. Burdon attempted to accomplish this while on a visit to England but he found that the funds fell short of the cost and he had to request the vote of a further £300

In 1923 Governor Fiennes was to visit St. Kitts for a cricket tournament and expected that electricity be installed at Government House. This meant that another £250 had to be found to cover the cost of a small plant at a time when the Government was already considering tenders for the lighting of the town. Three of the unofficial members of the Legislative Council found thist to be a waste of the taxpayers’ money. Burchell Marshall, the fourth unofficial member, agreed but added that having experienced the comforts of electricity could not oppose the vote. The Union Messenger was incensed.

The occasional habitation of the residence continued for a number of years. One man was engaged to look after it and when the visit of a governor became imminent a team of prisoners was sent out to set things straight.

In 1946, it was suggested that the Girls High School be moved there. The Headmistress, Miss Miriam Pickard had been looking for another location to house the school and had long had her eyes on Government House but before committing to the move she visited the place with Rev. Sunter of the Methodist Church. They discovered that there was a great deal of work to be done to make the building suitable for its new function but both also realised that there was going to be no other option. When the repairs were completed and the move was accomplished with the help of the students and the trucks of Public Works. Miss Pickard set up her apartment in the Governor’s private bedroom suite and a room in the basement became for a short time the meeting room of the Boys’ Club run by the Rev. W. Beckett. The upkeep of the building rested on Miss Pickard and a young lad who was her permanent helper. She describes the work involved in her little booklet on her experiences in St. Kitts. The building continued to function as a school till 1967 when the Girls High School and the Grammar School were merged into the Basseterre High School.

In 1978 the structure went up in flames. Only the stone foundation survived. A modern structure was put over it and a wooden floor put down and new Youth and Community Centre was created. This floor made the venue ideal for dance and martial arts practice sessions. Until recently the grounds were used for small fairs and outdoor exhibitions.