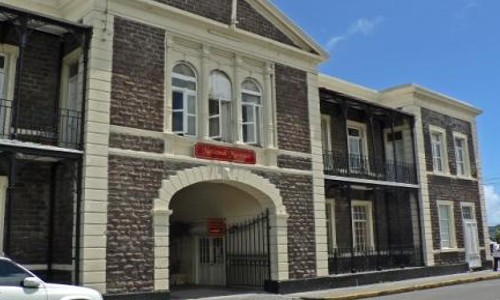 THE NATIONAL MUSEUM is located in what used to be the Treasury Building.  It is also the home of the St. Christopher National Trust.   Once situated on the Basseterre Bay front, the building is now at the meeting point of Basseterre and the reclaimed land of Port Zante. The Treasury actually moved to the corner of Church Street and Central Street in 1996 and the National Museum gradually moved in.

In 1857 St. Kitts had a new treasury building probably constructed of wood and which included a light house. £600 had been allocated for the project. Before returning the remaining sum to the Treasury, the Committee of Public Buildings bought a clock and placed it on the north side of the building facing Fort Street then deposited the balance of £9 10. 6. It was left over from the project. However in December of that same year money had to be found again for the construction of a privy at the Treasury Building. Why this had not been built in the first instance is anybody’s guess.

By 1883, the discussion on replacing it and extending the pier was well on its way. This was not surprising. Public buildings were generally not maintained well. The location of this particular one made is vulnerable to the Caribbean heat and humidity and exposed it to the sea blast, especially in stormy weather. The proposed building was to be 200 feet in length and 50 feet in width. The foundation was to include piles not less than 12 inches in diameter and spaced 6 feet apart. There were to be 10 rows of piles inclusive of two ends. The walls of the warehouse which was to be located on the ground floor were to be 2 feet thick. The upper floor was to house the offices. It was estimated that the overall cost was to be £3500. And there the matter rested for another five years.

The question of what to do about the building was raised again on the 9th May 1888 by Governor Haynes-Smith. In his address to the Legislative Council he asked the members whether the time has not come to take action as regards to the erection of suitable buildings for the transaction of the public business and the proper storage of goods. Later that year, the merchants of Basseterre petitioned the governor for a new shed on the import pier to protect goods when landed. The matter was placed before the council who advised that the new treasury building should be undertaken and that suitable protection should be provided for the goods that were being imported. The Executive Council was presented the plans and estimates in April 1889. The work had been done by Ivor Moore of the Royal Engineers. The new structure was designed to be an imposing one occupying a significantly larger area than other buildings in the small town. Governor Haynes-Smith and Treasurer Auchenleck felt that the old building was in a terrible state and favoured a new building. Councilors Berkeley, Davis, and Briggs agreed, while Councilors Dr. Semper, Pogson and Evelyn wanted to find out if there was any chance of repairing the old building. The Council was divided on costs with half the members accepting Moore’s estimate of £6000 while the other half felt that it could have been built for £4000.

Despite this general agreement among the members of the St. Kitts Legislature who were normally reluctant to spend extravagantly, the Secretary of State was disinclined to approve the expenditure especially or a stone and iron building. The Governor explained that he had favoured such a structure because good building stone was procurable to the extent that all estates buildings and many of the houses in town were of stone. It was also desirable that the building should be lasting. In view of the objections however he proposed that a new building should be rented when the current Treasury building became unusable but the Council voted to request that the Secretary of State reconsider. Finally in July 1891 it was possible for the Legislature to pass an ordinance to authorise the raising of a loan of £23 500 for the carrying out of a number of projects which, besides the Treasury Building, was were to Include a public library, a leper asylum, new cemeteries, alteration of roads, enlargement of prison, improvement of Cunningham hospital, renovation of the hospital in Nevis, and the construction of one in Anguilla and improvements to the Baths in Nevis. It was to take another two years before the Governor laid the tender for the construction of the new treasury building before the council and asked that duties on materials be remitted. After some discussion the cost of the project was set at £6350 and was won by Gould Brothers, a company originally out of Wales but who had been working in Antigua and Barbados.

The project did not enjoy smooth sailing. In 1894 the contractor had to deal with the problem of procuring white stone which was an outstanding feature of the design. Moore had included this in his drawings because he had seen how the stone had been used at Brimstone Hill and how well it had withstood weathering. The area around Brimstone Hill had this type of stone but it turned out that what was available was unsuitable. Most of the stones were not large enough for the facings and, those that were had flaws. The small quantities that were found, had been used in the structure. The company had incurred a cost of £1046 searching for white stone at Brimstone Hill. Moore insisted on the white stone but he found that the samples procured from Barbados were too course and estimates were obtained for procuring white stone from Bath, England which were prohibitively expensive so the decision was made to use the stone from Barbados. Under the supervision of Mr. Mitchell, the clerk in charge of works for the government on this project and himself a mason, four shipments of the stone was sent up from Barbados. Another problem that the contractors ran into was the lack of skilled labour. This made Governor Haynes Smith think that a technical training school was needed on the island. The fact remained that the building was well over budget. Mitchel recommended its completion for the safety of the building. He calculated that it would take about 6 months. The council voted to stop any further advances to Gould Brothers. In response the contractors offered to cut their losses and supervise the project for 10% of cost which the superintendent of Public Works felt was a good offer. On the 19th September 1895 the Treasurer moved the vote of £1200 to complete the treasury building. He noted that it was a shame to leave it in such an incomplete state and a waste of the thousands that had a ready been spent. He also pointed out that the building was in view of all passing vessels. There was a general agreement that the building had to be completed and the vote was passed.

This final vote might never have been taken but for some very intense negotiations. The island was hit by a depression brought on by the low cost of sugar. The Governor informed the Council that he intended to suspend a number of taxes and proposed that works funded by the Public Loan should be suspended except for the new treasury building,  the library, and the purchase of La Guerite which was needed for the expansion of Basseterre. He announced that he intended to make up any deficiencies by using the Immigration Fund. This was the fund that had been set up to assist with the recruitment of indentured labour from parts of the world outside the region. In 1895 this stood at £14,389 15s 9½d. The men on the Legislative Council challenged the Governor’s right to do this. While J T Manchester saw nothing wrong with the proposal, Councilor Gould called the measure “a piece of robbery” and Councilor Horsford said that the government had no moral right to appropriate the Immigration Fund which the planters had entrusted in the government for a specific purpose. He suggested that the government might as well appropriate the funds in the Savings Bank. Horsford also pointed out that the planters had asked for tax relief owing to the difficult situation they were in and that they had proposed that the government might appropriate the fund if this was granted. He objected to the fact that the Secretary of State had disallowed the ordinance suspending certain taxes. The response was given by the Treasurer who argued that most of the fund was accumulated interest resulting from the investment of these monies in securities in England. The present planters 'had neither moral nor legal right to the money'. The government had assisted them by organizing public work that kept the labourers from migrating and therefore placing at the disposal of the planters a quiet and peaceful population. That meant that the purpose for the creation of the fund had been met and the planters had been supplied with better labourers than “coolies and china men”.

The Administrator added weight to the argument by pointing out that the Immigration Fund was nothing like a saving bank. The deposits in the saving bank were personal and private and logged in safekeeping at interest. He pointed out that the planters were owners of nearly all the land in St. Kitts and that labourers were practically in the hands of the planters. There was no peasant proprietorship as an alternative to paid wages. The final ordinance giving government access to the Immigration Fund was approved on the stipulation that if money was required for immigration purposes it would not come out of the pockets of the planters.

The foundation stone which is located on the southern side of the building was laid by Lady Haynes-Smith the wife of the then Governor Sir William Haynes-Smith on the 21st of March 1894. After completion the Treasury  also housed the offices of the Administrator, Customs, Audit, Supply and Post Office. Once again a light house was placed in the dome at the top. For many years, it guided hundreds of captains of the boats and ships that docked at the wooden treasury landing pier over the Caribbean Sea which continued the line through the archway to Fort Street.

The symmetry and mass of the building was a manifestation of the colonial authority of Britain. While its equally sized apertures, and framing contrasted masonry communicated a sense of discipline and order. Once called the Gateway to the Island, the gated archway produced a sense of a controlled admittance into the town for all arrivals in the years of sea travel. The archway served another purpose. It divided the ground floor it two allowing for air circulation to offices that might have become too hot in a tropical climate.

Today the wooden pier that once lead from the boats to the building has been replaced by an apron leading to Port Zante, the new gateway into Basseterre, on which cruise ships dock.