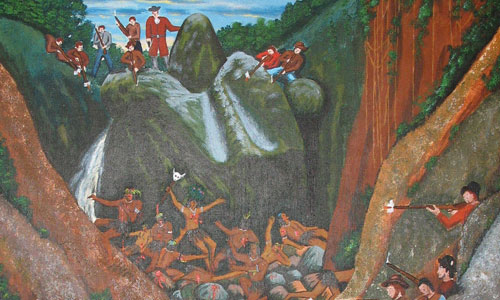 Bloody Point is situated to the west of Challengers Village. It gets its name from the Massacre of the Kalinago that took place in the vicinity.

English and French settlements had been set up on St. Kitts in 1624 and 1625. From the start, Warner and his men treated the Tegreman and his people as hostiles. When they set up their settlement “near to ye kings (Tegreman’s) house” they did not simply build homes, they also erected a fort of “palisadoes with flankers and loopholes for their defense.” However they told the Kalinago that they had done this to watch the fouls they had in the vicinity. The author of this initial account, John Hilton, wondered how Tegreman took this development and whether he actually believed them.

In August 1626, Thomas Warner returned to St. Kitts with over 100 more English settlers, enslaved Africans and provisions. It all strengthened his tiny colony. The fact that he had Africans with him shows that the English wanted to develop the island as a plantation colony and had realized that the Kalinago, with their subsistence agriculture, were not likely to be good labourers.

Tegreman was suspicious and with the increasing numbers of strangers so close to home, he decided to ask for help from the neighboring islands. A woman who lived in the Kalinago settlement is said to have warned Warner. The Kalinago often had women of other ethnic groups living with them often as slaves or servants, so they would have been treated as inferiors.

The Kalinago often prepared for war with a cassava based alcohol. Taking advantage of this Warner struck. Tegreman was killed and those of his allies who managed to escape headed out to sea and to their home islands. It was a devastating rout for Tegreman’s people. A few survived and their presence continued to the end of the century but their numbers were insignificant and the island became a European plantation colony as first envisaged by the Europeans who took it from the Kalinago.