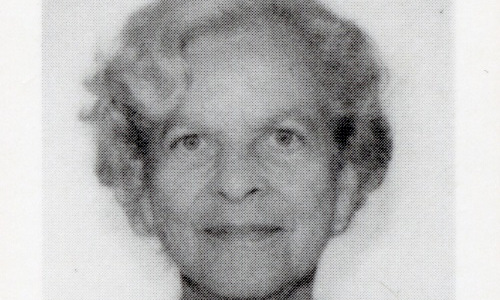 Jean Lenore Harney was born in St. Kitts on April 14th, 1925 to Mr. John Leonard Harney, a local businessman, and his wife, Mae.   She was the youngest of their five daughters.

She was educated, both at the primary and secondary levels, in St. Kitts.  As a student at the Girls High School,  Lenore (the name she was better known by) competed for the Leeward Islands Scholarship against other outstanding students, male and female,  from all secondary schools in Antigua and Barbuda, Montserrat and St. Kitts and Nevis.  She won the Scholarship in 1942, becoming the first female student from St. Kitts and Nevis to win it.  The Leeward Islands Scholarship was the sole scholarship that was available at the time for students in the Leeward Islands.  It was awarded annually to the student from these islands who earned the most outstanding results in the Cambridge School Certificate Examinations, offering the winning student the opportunity to attend university.

She studied medicine at Liverpool University in the United Kingdom and upon qualifying, became the first female doctor from St. Kitts, Nevis and Anguilla.  She returned to St. Kitts and worked at the Cunningham Hospital for several years.

She went on to further her studies at Harvard University, specializing in Public Health Medicine, after which Public Health became the focus of her medical career.

Dr. Harney had a successful career in many countries, working in Barbados from 1960 to 1969 as a Senior Medical Officer, then with the Pan American Health Organization (PAHO) and as the World Health Organization (WHO) representative in several countries in the Caribbean and Central America from 1969 until 1974.  During her period of employment with PAHO and WHO she was at the forefront of the immunization programs for MMR and Polio in the region.  Immediately following her work with PAHO and WHO, she held the post of Chief Medical Officer of Barbados for over ten years.

She ultimately received an award from the Caribbean Public Health Association in 1994 for her commitment to the public health of the region.

While living in Barbados in the sixties, Dr. Harney earned her private pilots license, becoming the first female pilot from St. Kitts and Nevis.

She spoke several languages, including Spanish and French.  Always wanting to learn more, she took Mandarin lessons at the Taiwanese Embassy in St. Kitts in her 80s.

She authored two published books and many short stories.

She was a champion of women’s rights, had a great sense of humor and travelled the world extensively.

Dr. Harney married local retired businessman Mr. Sydney Blake when they were both in their mid-80s and finally returned home to St. Kitts.   She spent her remaining years traveling between St. Kitts and Barbados, where she still maintained a home.