Caleb Azariah Paul Southwell was born in Dominica on the 18th July 1913 to Joseph and Amelia Southwell. He attended elementary school and became a teacher at the age of thirteen years then he went on to obtain the Leeward Islands Teachers Certificate. In 1938 he joined the Leeward Islands Police Force, a job that took him to Antigua, Montserrat, St. Kitts and Nevis. He stayed with the Force for six years.

In 1944 Southwell found employment as time keeper and assistant stock clerk at the St. Kitts (Basseterre) Sugar Factory. It was at this time that he was recruited into the Labour Movement by France and Bradshaw and for the next ten years he assisted as part-time organiser of the St. Kitts-Nevis Trades and Labour Union becoming its Vice President in 1947. In that same year, Southwell attempted to obtain a pay raise but only succeeded in getting himself fired. In 1948 he was in the forefront with other Union leaders organising the Thirteen Week Strike. During the Arbitration that followed, Southwell lead the team that argued the case of the workers in the Union. Following his dismissal from the Factory, Southwell spent a year representing workers free of cost to the Union. Eventually he was appointed the first sole organiser with a wage of $15 a week. He also functioned as associate editor of The Union Messenger.

His talent for writing and his political awareness came together in the publication of two pamphlets - The truth about Operation Blackburn and The Union - What it is, What it does.” the latter co-authored with Robert Bradshaw.

Paul Southwell was elected to the Legislature in 1952 and appointed to the Executive Council in 1955. The following year, when a ministerial system was introduced, Southwell took the portfolio of Communications and Works. Hoping for even more extensive constitutional changes, Southwell lead a delegation to London in 1959 and this resulted in the introduction of a constitution granting a full ministerial system in 1960. The post of Chief Minister was created and the subject of Finance which was previously under the jurisdiction of an overseas official, passed into ministerial hands. With Bradshaw in the Federal House in Trinidad, Southwell became Chief Minister, a post he held until 1966. 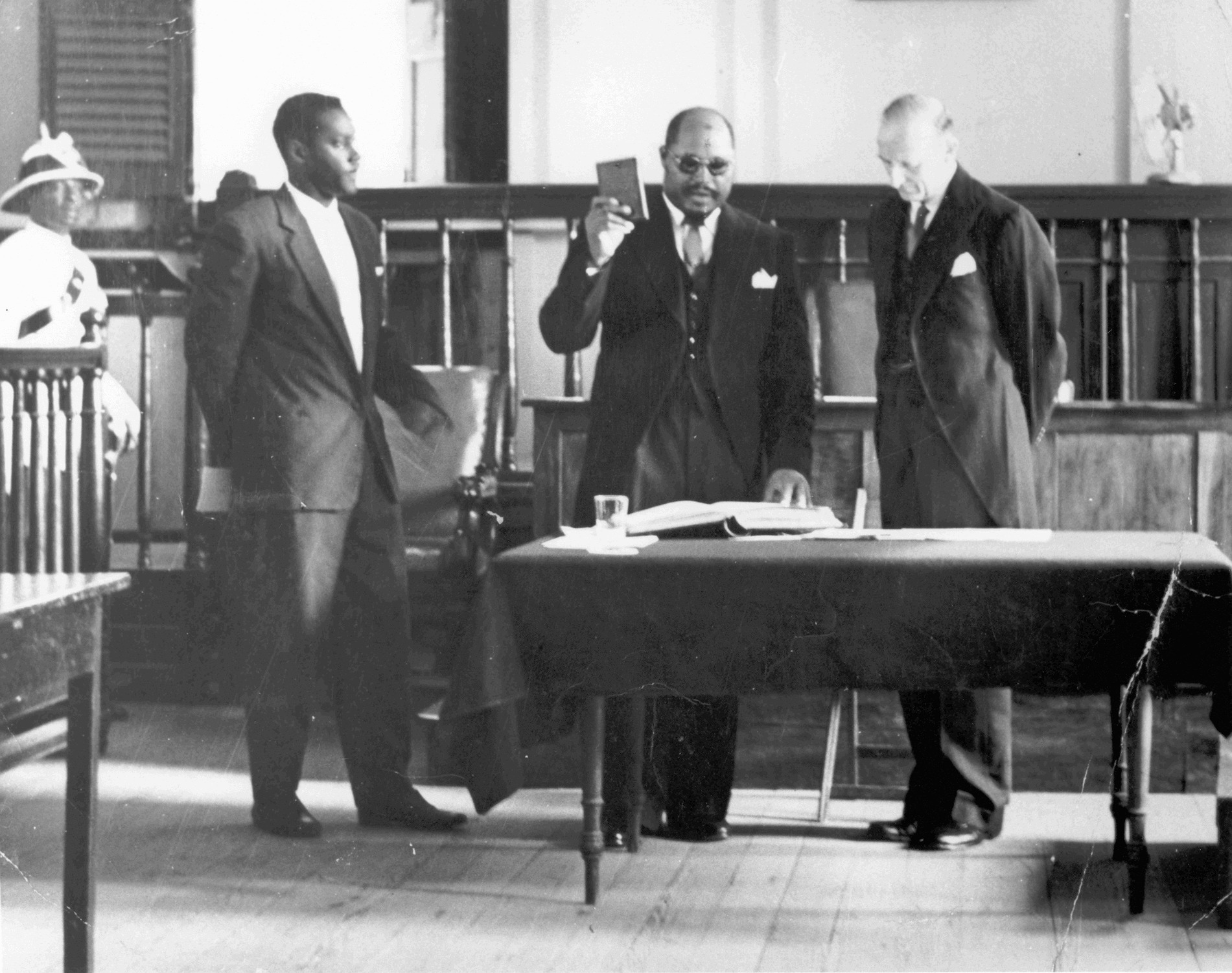 In 1965, the sugar industry employers, refused to grant an increase in wages and refused to request the Sugar Industry Price Stabilization Funds which were available to pay for the increase. In his role as Chief Minister, Southwell ensured that legislation was enacted to draw money from the Sugar Cess Funds to pay for the increases. This step which was subsequently emulated by Barbados and Trinidad drew considerable resistance from the employers and led to the Campbell Commission of Inquiry into the Sugar Industry.

St. Kitts-Nevis-Anguilla assumed the status of Statehood in association with Great Britain in 1967 and Southwell became Deputy Premier and Minister of Finance, Trade, Development, Industry and Tourism. Over the years he found himself very much involved in regional organisations. He was Chairman of the Caribbean Tourism Association and Chairman of the West Indies Associated States Council of Ministers. Following the death of Bradshaw in 1978, he was appointed Premier.

The catch words in the previous election had been “Youth and Experience” and many expected that the new leader would have been either Attorney General, Lee Moore or Minister of Education, Fitzroy Bryant. Although the decision to pass the mantle on the Paul Southwell was unanimous, it was not taken in good grace by all concerned. Within the Labour Party itself there was a strong body of opinion that suggested that the sixty one year old Southwell had no desire to remain as premier beyond the following election which was constitutionally due in 1980.

Until such time Southwell was entrusted with the portfolios of finance, tourism, trade, industry. Commenting on the direction of his administration, Southwell felt that his policies would be the same as Robert Bradshaw’s but that his approach would be different. He recognised the fact that some investors were actually afraid of Bradshaw and he hoped that his way of doing business would dispel such fears and attract enough investors to broaden the industrial base. He worked hard to attract tourism investment and especially to encourage international air services to operate from St. Kitts.

His commitment to sugar as the mainstay of the economy remained unshakeable. Although he recognized that falling prices were a problem he hoped to tide the country over by finding other products that could be produced from cane. Among the suggestions were the use of cane as fodder for animals, the production of structural board and the generation of electricity from bagasse.

Southwell went into his new job as Premier with the intention of finalizing independence as mandated in the previous election. He hoped to reopen the negotiations with Britain over Anguilla. The Nevis problem he saw as maneuvering on the part of that island’s politicians who hoped to gain something by threatening secession. The fragmentation of his own tiny state and the region as a whole made little sense to the man who recognised the fragility and limitations of small island economies. In CARICOM he saw the possibility of a stronger bargaining position for the whole Caribbean.

Southwell was keenly interested in the arts and in sports. He was at different times Librarian and President of the Mutual Improvement Society, and a devotee of the works of William Shakespeare and could quote the playwright at the least provocation. The State’s Art Festival of 1964 was his brainchild and not only was he involved in its organisation, he also took part as one of the lead actors. An avid sportsman, he was the founder of the Chief Minister’s Cricket XI in 1960 and later President of the St. Kitts Cricket Association. He was also an enthusiastic golf player.

Paul Southwell died suddenly on the 18th May 1979 while chairing a meeting of the West Indies Associated States Council of Ministers in Castries, St. Lucia. He was survived by his wife, Gladys, six daughters and five sons.