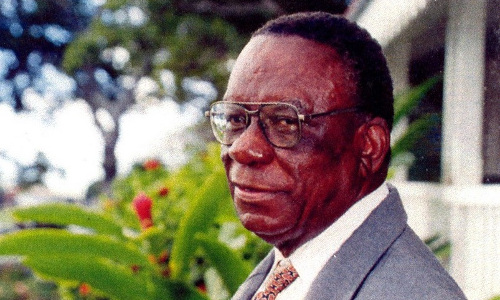 Basil Ebenezer Henderson was born on 24 April 1924 to Ethel Augusta Paul. Young Basil grew up in the Catholic church and remained devoted to it all his life. He would become the social organizer par excellence. He put all his energy and determination into the projects he undertook often travelling from one end of the island to the other, at all hours whether he had his own transportation or had to use the bus.

Initially he put a lot of interest in sports. He was responsible for beginning village sporting activities; football, netball, cricket and table tennis. He was an outstanding footballer and even captained the Rivals Football Club as well as the St. Kitts and the Leeward Islands team. He served in the Defense Force and in later years did not hesitate to share his memories of the war days and his time as a soldier.

For most of his adult life, Henderson was a civil servant. In his teens he worked in the supply office and then went on to the Labour Department and later to the office of the Administrator. As Head Messenger he took great pride in making sure that communications in the Civil Service ran smoothly. However he was also a welfare officer with duties to begin councils in the villages in St. Kitts. This was started with Conaree, Keys and Mansion. His training in this field was also responsible for his starting a branch of the 4 H in St. Kitts in 1950. Many youths, especially in the rural areas were given opportunities to develop a wide variety of skills through their membership in the club. Many went on to fill leadership positions.

In 1951, Henderson organized the first Easter Parade and the first Aquatic Sports meet in the Bay Front. His interest in sports continued even when his participation as an athlete came to an end. He was always looking for new ways to engage the community. In 1957 he was responsible for launching the first Carnival. This was an activity meant to attract people to the island so Henderson may be said to have contributed to the tourism product. Steel pan was already evolving in St. Kitts but Basil Henderson started organizing the Bands into a Steel pan Association coordinating visits of Kittitian Steel Bands to other islands and assisting others to perform here as guests. He organized Best Village competitions to encourage community spirit and to make sure the island looked attractive. For the children he started the Christmas Tree lighting event in the Square and year after year he ensured that children of the not-so-privileged enjoyed a Christmas present from Father Christmas.

Henderson had a number of opportunities to go to England or the United States to develop himself. He took those that allowed him a chance to make a bigger contribution to St. Kitts. It was never about his career. John F Kennedy at his inauguration said, “ask not what your country can do for you – ask what you can do for your country.” Basil Henderson lived by that principle till he passed on the7th of March 2003.