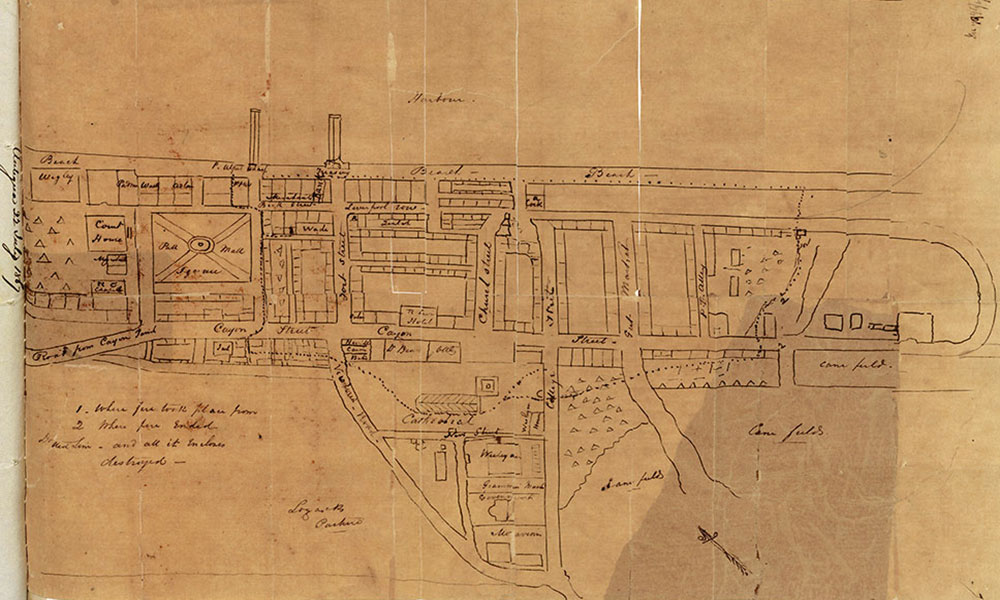 On the night of the 3rd July 1867, one of the worst fires in St. Kitts destroyed the town of Basseterre. It started in an uninhabited house in Reeve Alley just behind the western side of the Pall Mall Square (now Independence Square). That side of the Square was destroyed. The Alley connected the Square and Fort Street and the fire made its way down both sides. The night was a breezy one and the wind carried the flames on to Liverpool Row and College Street then close to the Cunningham Hospital (now the CFB College) which was saved thanks to the efforts of Dr. W J Branch and a team of men he coordinated. The fire then made its way down Cayon Street as far as St. George’s Anglican Church which was the last building to fall at 7.00 am on the morning of the 4th July. Phoebe Olivees, an 80 year old woman was its only victim. The whole area between Cayon Street and the Bay Frons and between West Independence Street and Market Street lay in ruins. The Treasury Building, The Court House, Government House and the Methodist and Moravian Churches survived. The Methodist Church is the only significant building that predates the fire.

Immediately the Lt Governor embarked on finding supplies to feed the population. The fire had destroyed a number of businesses and their stores so food shortages were expected. Nevis and neighbouring islands responded immediately. The Methodist and Moravian Churches assisted with clothing and financial contributions to the recovery effort soon started arriving from other parts of the Caribbean and from Britain. At the suggestion of the Lt Governor, the Secretary of State for the Colonies was approached about a loan to help with the rebuilding. Several attempts were made to get a loan on reasonable terms but London refused to help. Finally a call for tenders was issued in 1869 and funds were found to aid those who were still struggling with the reconstruction of their homes and businesses. The loan was paid in full and in a timely manner.

The road system in Basseterre was improved to allow easier movement of firefighting equipment around the town.

The reconstruction of St. George’s created a bit of controversy as there were those who felt that it should have been funded by the members of that church. It was finally decided that since the former church had been built with government funding and because it housed the town clock, the church would be built with the aid of the local administration but that the cost of the building would not include embellishments.

Finally to ensure against another similar disaster, the supply of water to the town was improved. Water was brought into town from the Old Road area. A reservoir was constructed at La Guerite and a number of hydrants set up in town.