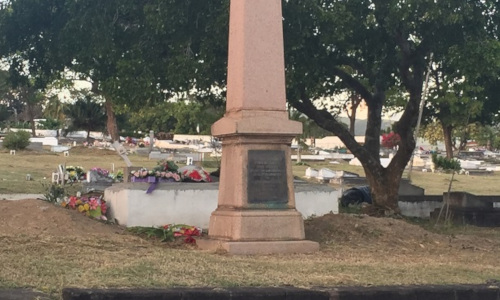 Sunday, 11 January 1880 was described as a fine day with some scattered showers.  At about 5.00pm the atmosphere became quite warm compared to the previous few days.   Then at about 9.00pm an intense cold set it.  There was a light shower which quickly came to an end.  By 11.00 pm the rains started falling and continued unabated till 3.00am of 12 January.  The night was very dark.

The flow of water in the streets was quickly augmented by the overflowing of the Fountain and Olivees rivers.  The water from Fountain river inundated part of College Estate while that from the Olivees River ran through Shadwell.  The water left deep furrows in the Monkey Hill and Olivees mountain.

In College Street, Basseterre, protective walls were broken down by the torrent.  The property of Dr. A P Boon and his neighbours was inundated with gut sand.  David Taylor, a carpenter his wife Esther, Esther’s mother and the couple’s nine children were all lost in the flood as was the family of another carpenter, Frank Burgundy and his wife Henrietta.

At Kings Ground, west of the new market (on Central Street between Westbourne Ghaut and Prickly Pear Alley) “once a hot bed of vice … is now the scene of the greatest confusion and woe.”  The western wall of the market was badly damaged.  The house of Lazarus Titley was carried off its foundation and that of Samuel R Carey was annihilated.  Carey was trying to get his wife and daughter to safety when they were both carried away by the rushing waters.  John Thomas Crooke had just rescued a friend when he lost his footing and was also carried away.

At Gut Market (Market Street), Elizabeth Somarsall and her son had a narrow escape but lost their house which in the past had endured other floods. Their loss was estimated in the hundreds of pounds as was that of Mrs. Joseph Parris.

The business premises of W A Cock, J Lagois, A Mondesire, Wade & Abbott, Thomas McNish and G W Bennett and Co. were all badly damaged.  The Square was covered in mounds of sand in which a number of dead were found.  Possibly these persons were trying to make their way to the Court House to find safety.  The Bay Front was littered with hogsheads of coal, boxes, puncheons, barrels and other items that once held merchandise. The Treasury Building, and the wharves as well as Mr Wattley’s business were badly affected.

Margaret Vanderpool and her son, George lived on the Bay.  In the flood, their little house was washed away with them in it.  The boy had learnt to swim with his friends in Irish Town and was able to hold on to a door that was passing them in the sea.  He took it to his mother and both of them held on to it while the current carried them out to sea.  As they drifted past Old Road, she was rescued by James Bristol and some others.  She was about 5 miles from land.  She told them about her son and Bristol took off again in search of him.  He picked up an exhausted young lad who immediately asked about his mother and when he said that she was pregnant, the boatman knew he had found Margaret’s son.  Two days later Margaret gave birth to a baby girl she called Flodine.  Margaret and George were among the lucky ones who were rescued at sea.   Others were not and their bodies washed up at St. Eustatius where the Governor ordered that they should be given a Christian burial.

Most of the victims were from Basseterre.  The Moravian Church in Basseterre has a memorial to the victims that were part of its congregation.  A pink obelisk at Springfield cemetery was erected in memory of all those who had lost their lives during the catastrophic flood of 1880.